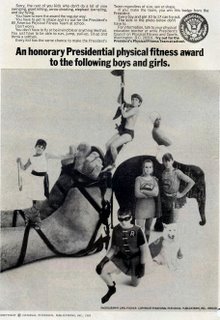 These kids all look so thrilled, don't they? This ad for the President (Nixon's) Physical Fitness Award program got comics readers' attention back in 1969 by including Robin, Superboy(with his Kurt Russell haircut) and Supergirl(with an attitude apparently). The kid with the giant is obviously the biblical David. The poor guy stuck hanging on the vine for the photo shoot can't be Tarzan so who is he? "Boy?" Korak? Bomba? What about the boy with the elephant? A Kipling character? Kim maybe? The text refers to "elephant trampling." Huh??!! And what's the deal with Krypto? Does he get the President's award too? Aw, c'mon, we all know he'd probably bite the #$@!! out of Nixon.
Posted by Booksteve at 5:47 AM