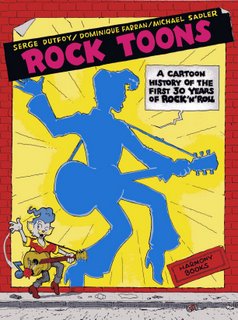 Here’s a graphic novel I’m betting most of you have never seen. ROCK TOONS was released by Harmony Books in 1986 but only through the bookstore market (and then just barely), not through comics shops at all. In 101 pages, this French graphic novel masterfully weaves the colorful tale of the complete history of rock & roll music as told through the eyes of several funny animal cat researchers. 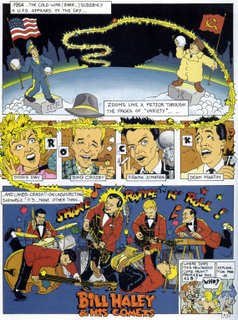 Nearly every aspect, big and small, is at least touched on as the cats attempt to weave the disparate threads together and keep it all within the context of the times. From Chuck Berry to the Beatles to Culture Club, from rockabilly to teen idols to punk, the creators do a fine job of offering the story itself while also, at times, satirizing it. 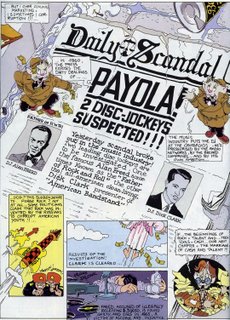 Who are these creators? Well, the underground-like art (including two black and white Crumb tribute pages) is by one Serge Dutfoy and pre-sages Justin Green’s later MUSICAL LEGENDS pages. Written by Dominique Farran and 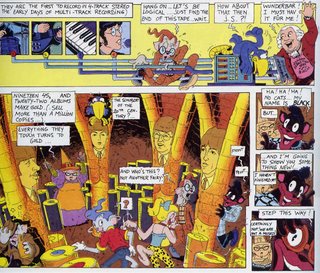 Michael Sadler (who’s also credited with the excellent English translation) ROCK TOONS is funny, inventively drawn and most of all, more educational on its subject than many far weightier tomes written by overblown rock critics (who shall remain nameless but you probably know who I mean). 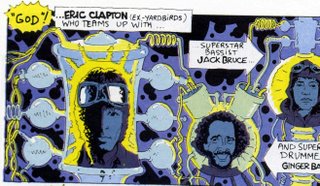 The reason that most of you have probably never seen it, however, is that the chain bookstores at the time apparently didn’t purchase it at all…until it turned up remaindered a few years later at Waldenbooks for 1.99 which is where I got my copy. A quick check of the ‘Net shows available copies from 99 cents to 19.95. I think it’s an undiscovered gem at either price. Rock on, cats! 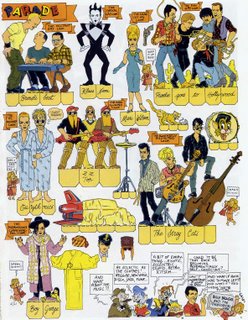 Posted by Booksteve at 7:43 AM