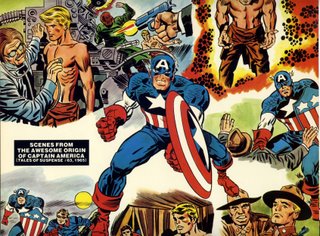 I just noticed that according to the 1977 Marvel calendar, this weekend marks the anniversary of the Avengers re-discovery of Captain America in 1963. Not sure if that's supposed to be the date it happened, the date that AVENGERS # 4 hit the stands or just some thoroughly arbitrary date made up by Roy Thomas, Gerry Conway and/or Archie Goodwin, the chief authors of said calendar. The whole thing may well have been just an excuse to run this cool (if poorly colored) Kirby/Sinnott illustration (with what looks to me like a Romita-retouched face on Cap). Still, one can't deny that Cap's revival was the single most successful super hero revival of them all and changed the Marvel universe as we knew it.

I don't really know the guy running around in Cap's togs in the comics these days, Ultimate or otherwise, but the original Cap, the REAL Cap, with his acrobatics, strong management skills and long windedness will always be a favorite! We salute you Captain! (and I don't care what anybody says, Bucky is STILL dead!! I mean seriously, what's next? "Uncle Ben's Revenge.")
Posted by Booksteve at 10:30 PM