Rowan Atkinson as Doctor Who 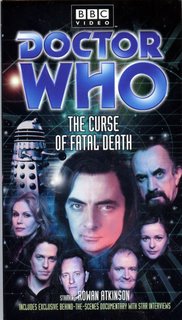 In spite of the expected Sci-Fi Channel meddling, Christopher Eccleston has taken the US shores by storm as the 9th Doctor. In between now and the 8th Doctor (Paul McGann)TV movie a decade earlier, surely it occurred to someone that Mr. Bean would make a credible Doctor. In 1999, though, when we got to see Rowan Atkinson's appearance as everyone's favorite Timelord, it was about as canonical as Lenny Henry's hilarious interpretation. As part of Britain's Comic Relief campaign and its periodic Red Nose Days, Atkinson appeared in a running series of sketches throughout the charity broadcast that were later collected on video in the UK. Surprisingly, since it didn't air at all in this country, it even came out in the US. 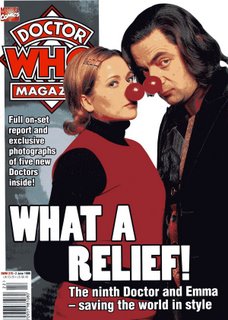 Rowan is a strong presence as the Doctor in THE CURSE OF FATAL DEATH, playing it straight(ish) with his companion Julia Sawhala (ABFAB, CHICKEN Run) in spite of a preponderence of sophomoric flatulance humor. As the character's arch-enemy, the Master, Jonathan Pryce

(currently on stage in NYC in DIRTY ROTTEN SCOUNDRELS where my friend Terri has great seats!) roles his eyes and chews the scenery with a maniacal glee that steals the piece almost completely. The Daleks also make an appearance and there are lots of other references and in-jokes. The highlight of the longish sketch, though, is when the Doctor, as he does from time to time, regenerates into his next incarnation...or in this case several of them, becoming Hugh Grant, Richsrd E. Grant, Jim Broadbent and ultimately, in a bizarre nod to all the fans who always wondered if the Doctor could regenerate into the opposite sex, ABFAB's (who am I kidding, THE NEW AVENGERS') Joanna Lumley just in time for a happy(?) ending. 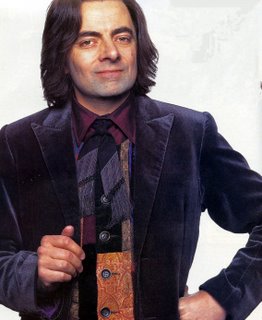 With the arrival of the new guys now, I'd say there's no real chance that Rowan Atkinson's old-fashioned Doctor could ever be seriously considered as anything but a footnote. There's a part of me, though, that thinks that's just too bad. Could worked!
Posted by Booksteve at 7:05 AM