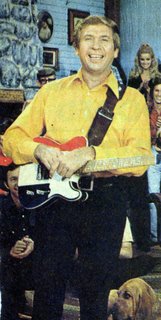 Contrary to popular belief, just because I live in Kentucky doesn't mean I'm a big country music fan. In fact, I only have one book on country music in my entire collection (seen here). 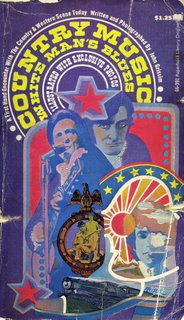 I did really like Buck Owens, though. As a child, his song TIGER BY THE TAIL was a radio favorite. Buck was born in Texas and pioneered what was called the "Bakersfield Sound" rather than the traditional Nashville style of country. I guess that's where the "Western" part of "Country and Western" music fits in. When HEE HAW premiered on TV with Buck as co-host, I laughed at the intentionally corny jokes but I was really waiting for Buck and his Buckaroos to get one of their straight musical segments. After the show went off the air (after what seemed like decades!) I often wondered why the stars, including Buck, were so infrequently seen. Buck apparently took his sizable paychecks into real estate and other investments, eventually buying his own entertainment complex where he reportedly performed a great show just last night! Buck died today at age 76. "Where, Oh where are you tonight? Why did you leave me here all alone...?" Thanks, Buck. We'll miss ya!
Posted by Booksteve at 8:49 PM