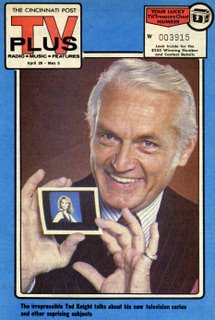 Wow! Seems like only yesterday but that last one was my 300th post! In spite of scanner limitations, computer glitches and unpaid broadband bills, we’ve been here nearly every day since last August. My virtual library has become a place of fun and remembrance and, after several years of depression, has given me reason to unbox the joys of my past and share them with you. And you seem to like them! That’s the best part! So let’s get started right away on the next 300. I’ve got a lot more stuff and it all has a story attached to it!
Here’s a couple of odds and ends starting with my last pic of Cissy Colpitts (AKA Cisse Cameron) that I have. It’s not much, actually, as it’s obviously a shot of Ted Knight from his flop, THE TED KNIGHT SHOW which is where I first found Cissy to be funny and sexy. For the completists among us, though, here it is. Her character’s name was Graziella.
Next is a cool shot of two of the most imaginative people who ever lived--comic book artist Jack Kirby and Looney Tunes legend Bob Clampett. 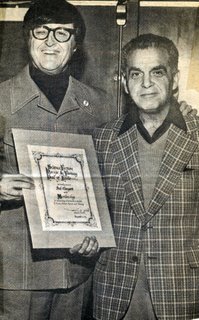