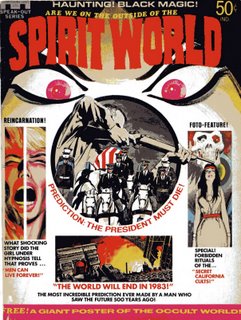 I hesitate to write too much here about the great and legendary comic book King, Jack Kirby,as his life and work is already being obsessively documented in magazines and on the Net. Over the weekend, however, I came across this little footnote, Kirby's SPIRIT WORLD, a 1971 DC magazine whose genesis can be found in great detail here:TwoMorrows Publishing - Spirit World - Kirby Collector Thirteenth Issue. I got this and its equally Kirby companion IN THE DAYS OF THE MOB at Woolworths of all places that year and it was obvious that Jack was enthusiastic about both of them.

For one thing, he was once again stretching the format, attempting graphic stories to compete with the detective story, romance and supernatural mags that were all the rage at the time. Kirby's infamous collages appear often but with much better reproduction than those in the comics. 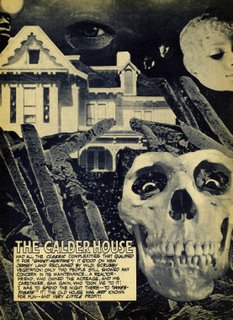 The inking by the much-maligned Vince Colletta here seems less rushed than usual and helps smooth out Jack's rough edges. 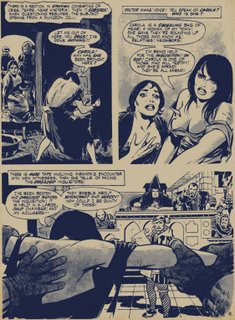 The stories, hosted by the Doctor Graves-like E. Leopold Maas (Seriously, is that the best name they could come up with? I mean, this is the guy who gave us Vermin Vundabar, Funky Flashman and Granny Goodness!) 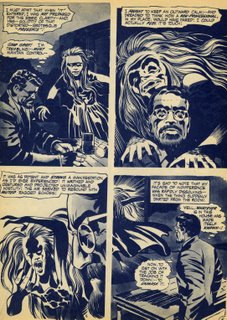 are typically over-the-top but the whole thing really did seem to me at that moment in time to be a departure...a next step...which of course meant DC quickly quashed the whole concept of "adult" mags just as they would soon do with the whole "fourth world" series. Sigh. Steve Sherman and everybody's favorite blogger Mark Evanier co-edited and even wrote and photographed the fumetti story herein. Additional stories intended for SPIRIT WORLD 2 ended up eventually in the color comic WEIRD MYSTERIES. Here are a few bits from the one and only issue.
Posted by Booksteve at 10:57 AM