Fellow blogger Jerry Beck recently came out with THE ANIMATED MOVIE GUIDE and I have to say I think it’s indispensable to any animation researcher. Over the years, Jerry has developed a solid reputation as a cartoon historian , validated by his appearances on the Looney Tunes and Disney DVD’s. 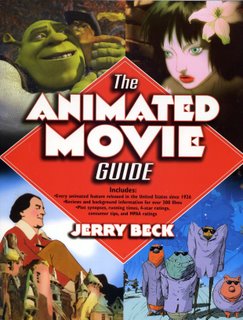 This book brings together capsule reviews of every animated feature released in the United States along with cast and crew information. I’m not that fond of the cover. The design is nice, the choices fairly logical and the colors are pretty. There’s nothing bad about it at all but for some reason, it seems to render the book invisible to me. When I first saw it on the shelf, I looked past it several times before recognizing it. 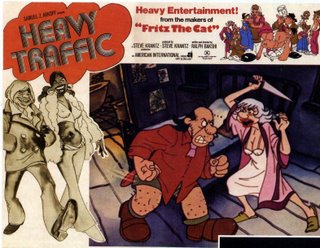 On the inside, many of the reviews are illustrated with small black and white still shots but there’s a really cool color section in the center made up mostly of rare lobby cards, some of which I’ve posted here. 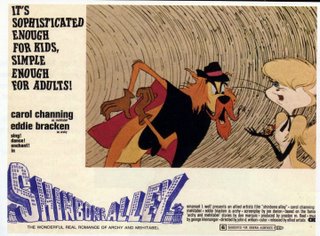 One of the first things I do with any book like this is to look up favorite and/or obscure items I’m familiar with to see if they’re present. It took me a minute to find KIKI’S DELIVERY SERVICE, one of my all-time favorite animated features, but that turns out to be because Jerry has logically segregated features that didn’t receive actual theatrical release. SHAME OF THE JUNGLE was right where it should be (The American version of this European Tarzan parody could be termed the first SATURDAY NIGHT LIVE movie, featuring as it does the voices of John Belushi, Bill Murray, Christopher Guest and Brian Doyle Murray). 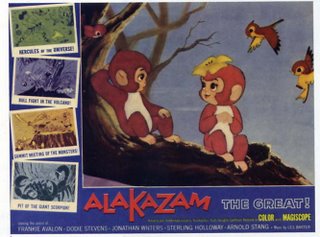 ALAKAZAM THE GREAT!, an early fave of mine and one of the first animated Japanese features to be released in this country was present and accounted for as was THE MAN FROM BUTTON WILLOW and SHINBONE ALLEY. I did NOT find any mention of THE WEIRD ADVENTURES OF MUTT AND JEFF AND BUGOFF,

the cold war spy spoof that my friend Derek Tague and I had just been discussing. Let’s not be picky, though. What IS in this book is a nearly perfect blend of facts, reviews and trivia that ultimately tells the tale of feature length animation one picture at a time. Not to pat myself on the back but I knew quite a bit about animated features going in to this tome but I learned a heck of a lot more before I finished it. Bravo, Mr. Beck!
Posted by Booksteve at 7:07 AM