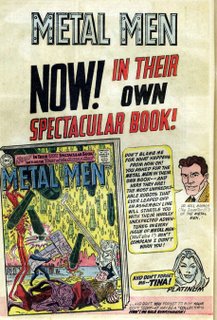 Here's a 1963 ad from WORLD'S FINEST #133 promoting the first issue of the METAL MEN in their own mag (after a few SHOWCASE tryouts). A few years ago I decided to re-collect METAL MEN since it was A)cleverly written, B)professionally drawn, C)filled with bizarrely fascinating characters and even D)educational. Besides all that, my wife really liked the book, too. Unfortunately, re-collecting METAL MEN was cost-prohibitive as I apparently hadn't realized just what a cult the book has for itself! Thus we find ourselves in the age of DC SHOWCASE in which all things suddenly seem possible in terms of reprints. Why, you could just about do the whole run in two of those 500 page volumes and throw in all of those BRAVE & BOLD team-ups with Batman and maybe the Walt Simonson revival to round out a third! Heck, they started this series with METAMORPHO, they have SO got to have METAL MEN in the planning stages! Now we just need to get that grassroots movement for SUGAR & SPIKE to pick up speed!
Posted by Booksteve at 6:33 AM