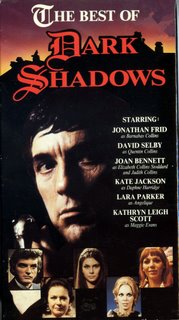 People tend top forget just how amazingly freakin' popular DARK SHADOWS was circa 1970. It may have been more than a little cheap looking, with no time for retakes no matter what prop fell but it was beloved. DARK SHADOWS was cover-featured on local TV mags, the stars appeared regularly on talk shows (and kids shows), the soundtrack album hit the charts, it was prominently featured in FAMOUS MONSTERS but also in SIXTEEN which had a running feature recapping the series entitled THE WHOLE TRUE STORY OF DARK SHADOWS. Kids loved it, adults loved it and let's face it, you aren't going to find AS THE WORLD TURNS-THE MOVIE in Maltin or on IMDB but there are the two DS movies. In its afterlife, it spawned an industry of spin-off books, tapes, CDs and conventions. It was even one of the very first series to have its entire run committed to video (although in those pre-DVD days, that meant 200 plus tapes!!). Even the remake series has spawned a cult! All of this came originally from the brain of DARK SHADOWS creator Dan Curtis who has now left us as so many of my childhood heroes have done in recent years. Curtis wasn't a prolific producer but all of his productions were memorable and bore a unique quality in their style (and musical scores) that made them fairly easy to identify. 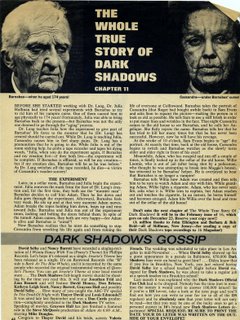 Still, the original DARK SHADOWS, although diminished now to cult status, is his most memorable legacy. Of the stars on the series, Jonathan Frid went on to star in Oliver Stone's first feature film, SEIZURE, before fading into the show business background. David Selby got a shot starring in THE SUPER COPS, then hung on in a few more films and on TV himself. Lara Parker worked steadily for 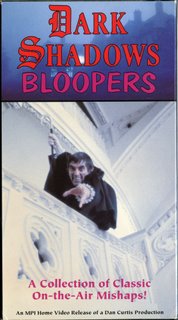 awhile in films and TV 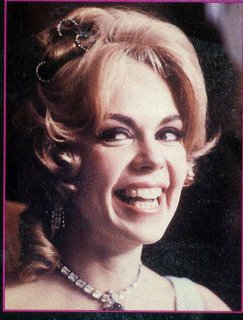 and Kate Jackson went on to considerable fame as Charlie's "smart" angel among other successes. Kathryn Leigh Scott started Pomegranate Press (and once sent me a hand-written rejection note for my book proposal!), Louis Edmonds prospered on a real soap opera, Dennis Patrick worked as a busy character actor as did Thayer David, Roger Davis worked as an announcer and later TV star before taking up real estate and John Karlen, who overacted shamelessly as Willie Loomis on DS, won at least one Emmy Award for CAGNEY AND LACEY. It's thanks to Dan Curtis that we got to know all of those people. It's thanks to Dan Curtis that one of my greatest childhood memories is hurrying home (or more likely to my 5th grade girlfriend's house which was closer) to enjoy DARK SHADOWS.
Posted by Booksteve at 9:48 AM