Did you ever know anyone with mental health issues? I'm betting you did because many conditions that used to go undiagnosed are now out in the open...at least on some levels. It's not that more people have issues but more people than ever KNOW they have issues. Maybe YOU do?

I've known a number of folks who have been dealing with severe depression, being bi-polar, etc. Some have been employees, some relatives, but all friends whom I hated to see suffer when society preferred to act like everything wasn't as bad as they knew inside it was.

One of my friends is a young woman who nowadays has her own situations under control...but still there. Her birthday is coming up on January first of 2022, and she has started a Facebook fundraiser to benefit Mental Health America.

Christmas in the Funnies in the Forties

Bond Not Bond Blogathon: The Man from Hong Kong-George Lazenby

Just because Sean Connery swore off Bond films after YOU ONLY LIVE TWICE in 1967 certainly didn’t mean that Cubby Broccoli and company were going to retire 007 and his license to kill (at the box office!). Almost immediately, testing began to find a new, unknown (or more or less unknown) actor to play England’s favorite secret agent in another Fleming “adaptation,” ON HER MAJESTY’S SECRET SERVICE. In 1968, LIFE magazine did a big feature about the finalists, debuting Australian model George Lazenby as the final choice based largely—as producer Cubby Broccoli would later say—on how macho he came across.

What happened next has been well-documented in numerous places. Lazenby’s Bond movie and his performance in it received decidedly mixed reviews and he was reportedly convinced by his agent that spy movies would no longer be hot in the 1970s so he quit. Either that or he was dropped from his contract.

Although George claimed at first to have many offers from major studios, his next film was a low budget international production called UNIVERSAL SOLDIER in 1971. He turned up fairly often in gossip columns with stories about his being unreliable, unemployable, and even uninsurable due to some debilitating condition he had contracted. One gossip columnist said Lazenby, “was last seen practicing yoga atop some hill in India.” At the same time, he started taking martial arts lessons and ended up in magazines like the newly released in 1973 FIGHTING STARS, meant to cash in on the martial arts movie craze hitting America.

That craze had George reportedly in contact with Bruce Lee, whose star was leading the way in the genre. Lee is said to have wanted Lazenby for his all-star GAME OF DEATH, the film he began and was hoping to finish before Hollywood came calling with ENTER THE DRAGON.

With Lee’s untimely death in July of 1973, his last unfortunately named movie was tabled, to be rewritten as an exploitative cash-in half a decade later using some of Lee’s original footage and a host of better remembered stars than Lazenby in a newly contrived plot.

At the time of Bruce’s death, however, his producer Raymond Chow was left with the completely unexpected sudden loss of his major cash-generating star and scrambled to find a replacement as well as try different types of movies using martial arts.

Which brings us to THE MAN FROM HONG KONG, a 1975 Raymond Chow co-production set mainly in Australia, of all places, and starring longtime martial arts star Jimmy Wang Yu. Known for his roles as the one-armed boxer and one-armed swordsman, Jimmy was actually in possession of all his limbs. Despite his boyish good looks and his movie martial arts skills, he had no real personality to speak of and tended to come across as a matter-of-fact, by the book kind of guy. This served him well in this picture as he was playing an out-of-his-element Hong Kong policeman dispatched to Australia on what should have been a simple mission to return an arrestee (the great Sammo Hung, who also choreographed the picture).

It’s the Australian setting that allows for the significant presence of ex-Bond George Lazenby—a consolation prize, perhaps, from Raymond Chow.

The picture starts in the best Bond tradition with a pre-credit sequence, although it doesn’t feature either of our stars at all. Instead, Sammo Hung is on an Australian tour bus, meeting someone for an exchange of money and drugs during a remote stop. But the two men doing the exchange are spotted and bolt, only for Sammo to be captured by the authorities after a lively chase. The other man is killed.

This segues directly into the film’s excellent title sequence, to my mind one of THE best title sequences of any film of the 1970s. The producers apparently planned it that way, too, as more money was reportedly dropped on getting a hit song out of the sequence than was spent for much of the rest of the picture.

That song was “Sky High,” by the UK-based band, Jigsaw, as catchy an earworm as there ever was and a perfect theme song here. I’ll go so far as to call it the best Bond theme that never was. Over training footage of the Hong Kong police force, with Jimmy Wang Yu as Hong Kong’s Inspector Fang, we watch as a mysterious hang glider circles the cityscape in spectacular fashion only to land right in the middle of the police academy training exercise field.

Turns out to be an Australian woman journalist (although actually performed by a male stuntman) and Fang is both stern and smitten with her to the point that they’re in bed together before Fang heads off on his routine extradition jaunt to the land of Oz. Routine but for the fact that his charge is killed before he can return him to Hong Kong.

Said to have been conceived as Wang Yu’s first English language film, he was nonetheless dubbed, poorly at times, as the violent police Inspector. Lazenby, as Sydney, Australia’s drug overlord and crime kingpin, steals the spotlight. One critic even wrote, “A crash course in martial arts and Sammo Hung’s excellent choreography transformed Lazenby into a credible performer. In THE MAN FROM HONG KONG, he moved rather better than nominal leading man Wang Yu does.

George, as “businessman” Jack Wilton, makes his first appearance more than a half an hour into the picture, sporting a stylish mustache and arriving at his private dojo with a decidedly less than impressive young woman who could never have made it as a Bond Girl. Elsewhere, Inspector Fang has just taken out one of his best men and Wilton surveys his students in action in order to find a suitable replacement. When he isn’t impressed, the cocky Wilton himself takes on three at once.

Wilton is described as a “Mr. Big,” into drugs, prostitution, gun-running, and carrying a lot of political muscle, also. The Aussie cops Fang is working with have never been able to get anything on him but Fang determines to stop him personally once and for all after Wilton has him nearly killed. Fang and his escorts go to see the big man but fail to do so. Seems he’s off in his sumptuous penthouse apartment with its sunken living room arranging a “slight accident” for the annoying Inspector Fang.

Fang contacts the only Australian he knows, the sky-riding lady journalist from the credits, and gets her to take him along as her plus one to a fancy outdoor Wilton party where the two finally do meet. Lazenby here shows not only more charm than Wang Yu but, really, more than he did as Bond, too. The pair play a little cat and mouse before Wilton goads his enemy into a kung-fu battle dance where each man holds his own, augmented by sound effects, of course. Sneak that he is, Wilton steps off to the side, leaving the fight to his stuntmen bodyguards. In the end, it’s Caroline, the journalist, who stops the fight just as Wilton had taken aim at Fang with a crossbow.

Another young woman is introduced to the plot and given a romantic subplot with Fang, complete with sappy love song and softcore sex scene, only to be killed off by a bomb attached to the vehicle she’s in with her new paramour. In movie time, they hadn’t even known each other 15 minutes, but now it was personal. 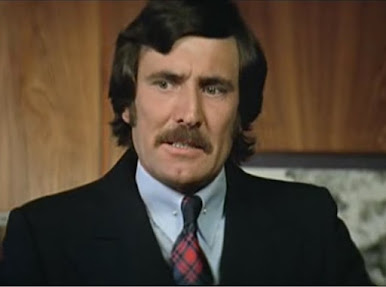 Fang goes after Wilton’s men while Wilton makes more attempts on Fang’s life as well. Finally, taking a cue from Caroline’s earlier hang-gliding—as well as the picture’s original title, THE DRAGON FLIES—the Inspector borrows the hang glider for a sail over beautiful Sydney directly onto Wilton’s roof. An epic, climactic kung-fu battle occurs after Fang kicks in through Wilton’s high-rise window, leading to not only evidence of Wilton’s evildoing but also to his explosive demise.

THE MAN FROM HONG KONG wasn’t a huge budgeted movie and it was the very first directorial effort for Brian Trenchard-Smith. None of that showed onscreen, however, as this is an exciting mix of cop drama and kung-fu flick, loaded with dangerous stunts (both Lazenby and Jimmy Wang Yu were injured during production) and action sequences. It’s a little lopsided that the villain is more personable than the hero but that actually looked good for George Lazenby’s comeback prospects.

Unfortunately, that was not to be, as George settled back into under the radar international tax dodge flicks and, later, the occasional 007 cameo homage or documentary. In time, his acting got better, and he worked fairly steadily in TV and sometimes low-budget films, but he never did recapture the momentum he had been handed on a silver platter with Bond, or that he almost seemed to grab again in 1975 with THE MAN FROM HONG KONG. 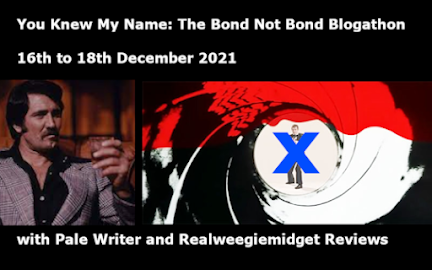 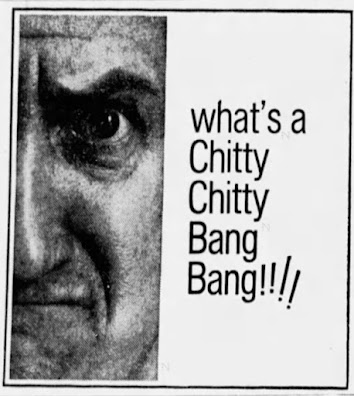 Often dismissed today as just another of the overblown 1960s movie musicals, 1968's CHITTY CHITTY BANG BANG actually was a much bigger deal than I remember! Based on the late Ian Fleming's children's book about an eccentric English family and their flying car, the film began shooting in late Spring of 1967 with a long shooting schedule planned to lead into the Fall. Starring Dick Van Dyke and former UK child star Sally Anne Howes, scenes were still being shot into the early Spring of '68! The film was set for a December, 1968 release as a roadshow attraction, something that no longer exists. These were the mega-releases in exclusive theaters with advance-ordered, higher-priced (in this case $2.50 at a time when theaters mostly charged 50 cents to get in)  reserved seating only. It would be months before CHITTY parked at any neighborhood theaters in the Spring of 1969.
The book itself was only a few years old but just to make sure people were talking about the movie in the lead-up to its release, the ads seen here began appearing as early as April of '68!
In England, Princess Anne attended to official royal world premiere. The US Midwest premiere was a charity event at Cincinnati's new Cine Carousel Theater with its gigantic screen.
I couldn't find the exact date it moved across the Ohio River into Kentucky, here, but it seems to have been some point between February and June of 1969. That was when I had my first date, age 10, with my 5th grade girlfriend Debbie. We saw it one Saturday afternoon at the once-regal but now nearing its demise Liberty Theater in Covington, KY, with sticky floors, uncomfortably ripped and torn seats, and not many other patrons.
Debbie and I liked it, but many of the critics and moviegoers at the time were less appreciative. CHITTY has become a cult film over the years, though. 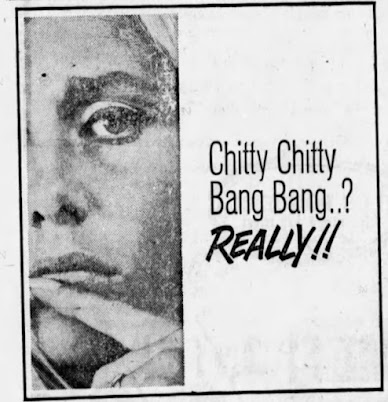 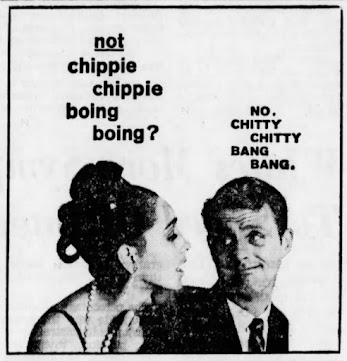 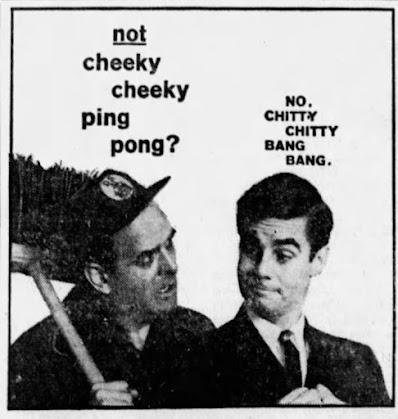 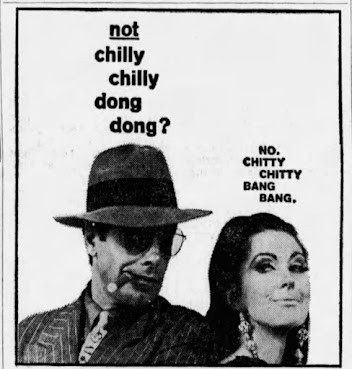 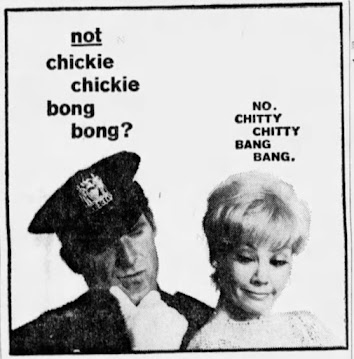 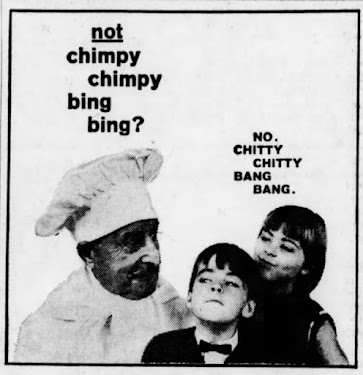 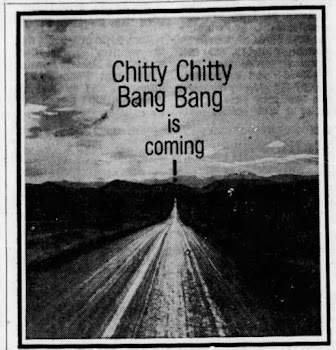 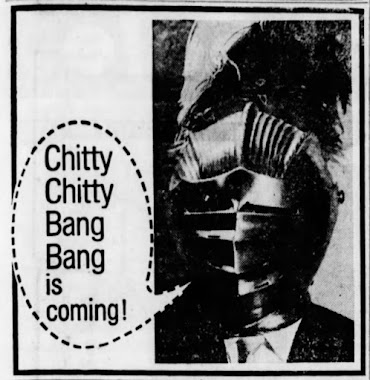 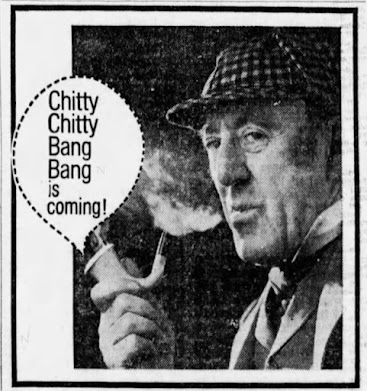 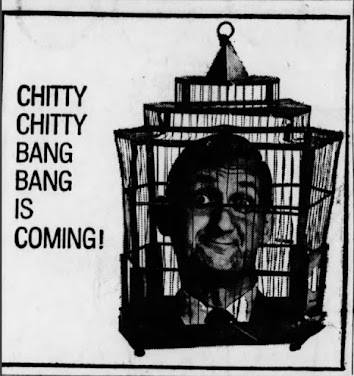 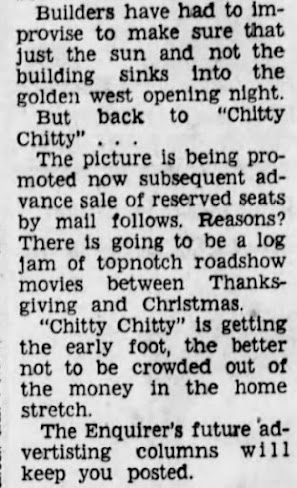 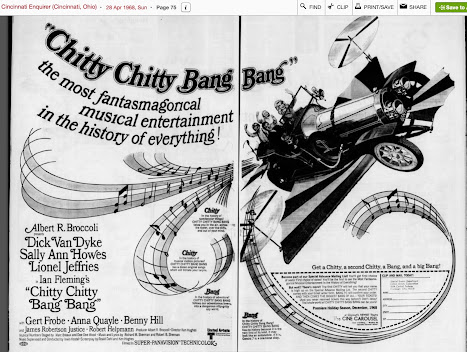 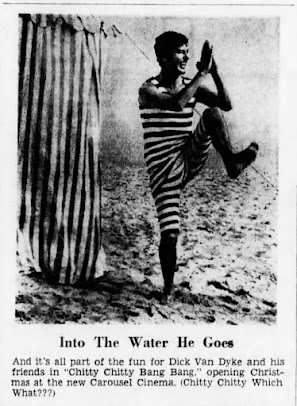 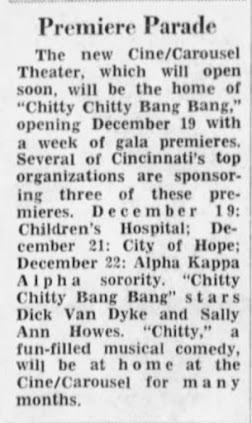 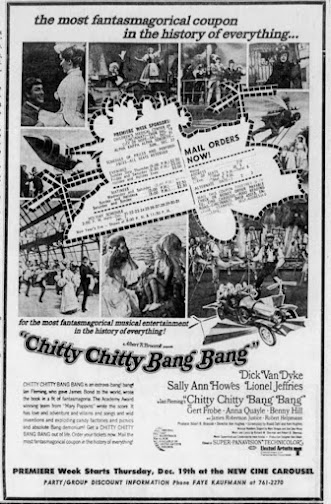 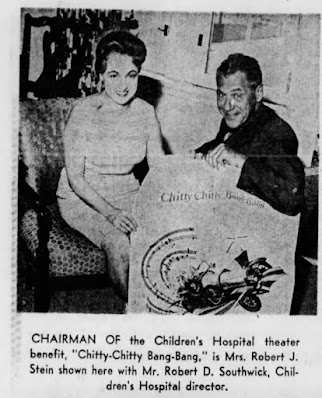 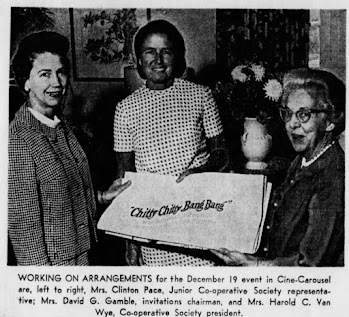 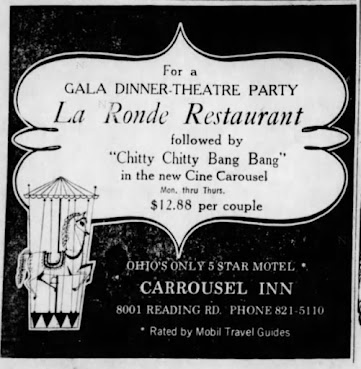