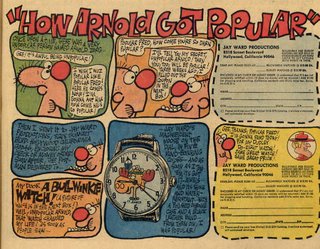 Bullwinkle J. Moose appeared in a long-running series of ads for Cheerios back in the early sixties that were similar to the later Hostess ads featuring super-heroes and other comic characters. This funny ad, however, dates from early 1971 and originally appeared in (of all places) CASPER'S GHOST LAND # 59. If you read the ultra-fine print, this is not some licensed product but directly from 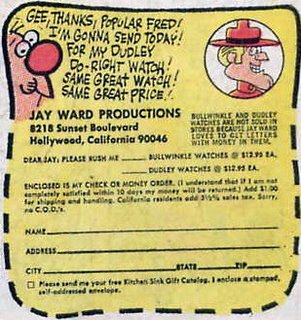 Jay Ward Productions. It even says "Bullwinkle and Dudley watches are not sold in stores because Jay Ward loves to get letters with money in them."
Posted by Booksteve at 8:05 AM