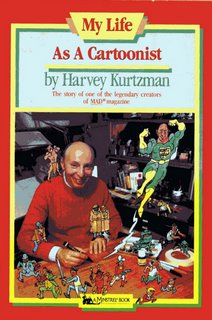 When the time comes that my son's third or fourth grade teacher says he has to write a book report on an autobiography of an important historical figure, I'm giving him this one and I deny the teacher to say it doesn't count! We may never know the full extent to which Kurtzman's influence has been felt on our culture, popular and otherwise. Based on this juvenile biography, written with Howard Zimmerman and published in 1988, I'd have to say Kurtzman himself really didn't get it. Every comedian and writer who was influenced by MAD has Kurtzman to credit. Children who learned the horrors of war through Kurtzman's EC war comics undoubtedly carried this into the next decade's anti-war protests. As stated in a previous post, Harvey was a stepping stone for Gloria Steinem, Terry Gilliam, Robert Crumb and others who have themselves influenced society and culture.MY LIFE AS A CARTOONIST tells Harvey's story in a fairly straightforward way with the notable exception that what was arguably Kurtzman's biggest success is (understandably considering the intended audience) not mentioned at all. That would, of course, be LITTLE ANNIE FANNY, the most expensive comic strip of all time. Published in PLAYBOY from the early sixties through the early eighties, the fully painted strip featured artwork by Kurtzman's long-time sidekick, Will Elder, aided and abetted from time to time by such comic art luminaries as Frank Frazetta, Russ Heath and Jack Davis. Denis Kitchen edited two annotated volumes of reprints a few years back. Still, we see the artist's beginnings, his early work, his EC success, MAD, TRUMP (which is mentioned even though it was also published by Hefner…who is not mentioned by name), HUMBUG, THE JUNGLE BOOK, HELP! And NUTS! He even goes into some detail about his early contributions to SESAME STREET. 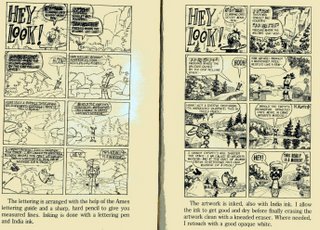 There's lots of single panel reprints and even an interesting “how-to” section. I'm surprised that packager Byron Preiss was able to convince the publisher to do this book since much of Kurtzman's work was either out-of-print or too adult but I'm glad they did. I think kids need to learn more about the world around them and I think it's a different world than it would've been if there hadn't been a Harvey Kurtzman.
Posted by Booksteve at 2:20 PM