The Many Faces of Eric Clapton 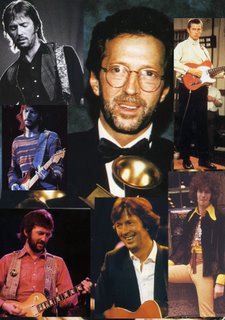 I was watching THE CONCERT FOR BANGLADESH in its recent re-release when I was struck by just how bizarre it was that Eric Clapton in the new documentary looks completely unlike Eric at the concert! In fact, as you look at photos of Eric throughout his career, there are times when it’s tough to believe these are all the same man. Photos seen here are from the 1994 book, THE ERIC CLAPTON ALBUM by Marc 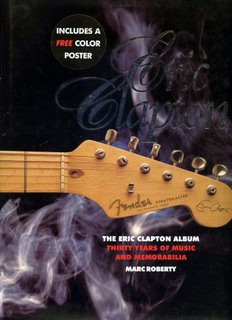 Roberty.
My 14 year old cat Chauncey, by the way, is a big fan of Clapton. We discovered many years ago that if we're taking him to the Vet we need to keep Clapton music on the stereo to keep him calm. It isn't just guitar music, you understand? It's Clapton! Just recently, VH1 Classic was running the Tears in Heaven video and Chaunce came walking quietly into the living room and settled into a sphinx position directly in front of the television. When the song ended, he rose, stretched and went about his cat business.
Posted by Booksteve at 11:19 AM