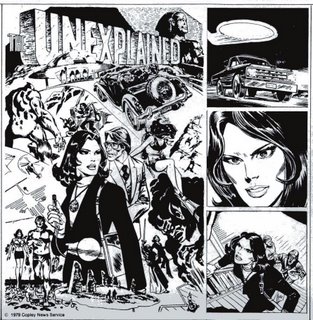 Described by MEDIASCENE as "Mary Perkins: Psychic Detective," THE UNEXPLAINED was a 1979 attempt at newspaper syndication by writer Marv Wolfman and the legendary artist/inker team of Ross Andru and Mike Esposito. According to Steranko's tabloid, the team had been granted unprecedented concessions by the Copley News Service when it came to rights. Wolfman is quoted as saying that he would be promoting the strip, about a parapsychologist named Raven Winters, throughout the summer at comic book conventions. The question is, whatever happened to it? Did it run anywhere? Have any of you seen it? A check of the Web brought me to this relatively recent interview with Mike Esposito at http://www.adelaidecomicsandbooks.com/espo.htm in which the former Mickey Demeo (and Joe Gaudioso!) recalls "Ross Andru and myself with Marv Wolfman had a strip. Marv wrote it and Ross and I designed it and put it together. The Daily News advanced us for eight weeks of continuity before it was going to be printed, before we got our contracts." With no mention at all of Copley, Mike then points out that the News went on strike for some weeks and when the presses rolled again, they had changed their mind on the strip. An additional recollection by Wolfman from the same interview adds "The female lead was Raven Winters - I used both names in comics later on, Raven in the Titans, Winters in Night Force. She was a parapsychologist at a university with a male associate." Again, though, did it ever run at all or was it somehow dependent on the Daily News that much? Is this promo piece the only thing anyone has ever seen? Unless we hear otherwise from some of you, this must remain...THE UNEXPLAINED.
Posted by Booksteve at 8:31 PM