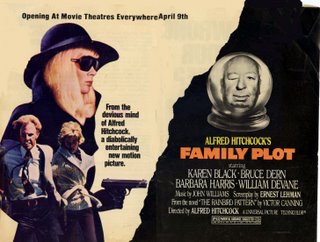 Last weekend I had the opportunity to watch Alfred Hitchcock’s swansong, THE FAMILY PLOT, for the first time since its original 1976 release. I found it to have aged quite well. In fact, if I recall correctly, one of the chief criticisms of the film in its initial run was that it was hopelessly old-fashioned. That’s still there only now it seems to give the picture a rather "timeless" feeling. After all, Hitch had certainly demonstrated that he could make a modern day thriller with his previous movie, FRENZY. Perhaps the master director actually intended for this one to be old-fashioned. If so, he succeeded admirably.
Based on the little-known but better-titled novel, THE RAINBIRD PATTERN, the story here introduces us to two couples. Bruce Dern and Barbara Harris are lower middle class con artists. They’re also the heroes. The other couple consists of handsome, charming, rich William Devane and his girlfriend, Karen Black, both kidnappers! Harris is an absolute delight as a phony medium bilking aging rich widows. Dern is here cast against type as a cab driver cum private eye who smokes a pipe to lend class to his deceit. Supposedly Hitchcock wanted Jack Nicholson for the role but that may be apocryphal as Devane seems to be channeling Nicholson for his role. Coming off of a TV success as JFK, Devane (himself replacing Roy Thinnes a ways into the shooting) got his one real big chance at movie stardom here and…well, kinda blows it by seemingly trying to be Jack. He’s worked steadily ever since (including recently on 24) and he’s always a pleasure to watch but he coulda been somebody! Cross-eyed Karen Black, near the peak of her somewhat unfathomable seventies popularity, could have been anyone here. She’s in disguise much of the time and her character is never really developed. By contrast, the consistently under-rated Dern is a joy to watch in a rare sympathetic lead as his bungling attempts at investigations to find a missing heir for one of Harris’ clients unwittingly bring the two couples closer and closer to an inevitable meeting.
Is it a serious thriller with maybe a little too much comedy or a light-hearted send-up of all things Hitchcockian? Don’t judge by me. I consider PSYCHO to be a comedy! Rent it or catch it on cable and judge for yourself. They didn’t call Alfred Hitchcock the Master for nothing! Even lesser Hitch is better than nearly anything else. I liked THE FAMILY PLOT in 1976 but I REALLY liked THE FAMILY PLOT thirty years later!
Posted by Booksteve at 6:54 AM