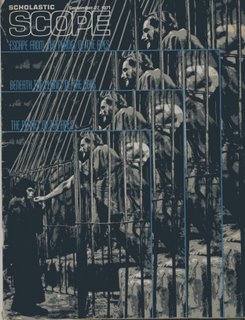 I didn’t see PLANET OF THE APES when it first came out. I did, however, catch a matinee of BENEATH THE PLANET OF THE APES (incongruously double-featured with BUTCH CASSIDY AND THE SUNDANCE KID) and from then on I was hooked. After ESCAPE FROM THE PLANET OF THE APES was released it quickly became my favorite (and the only one I still have on tape). Part of the reason I guess was that I got to play Cornelius in the adapted script we read out loud in English class out of this issue of SCHOLASTIC SCOPE. After that, Roddy McDowall became one of my favorite actors. He was certainly easy enough to see in those days appearing extensively on television in COLUMBO, McCLOUD, NIGHT GALLERY and just about every third made for TV movie while still working regularly on the big-screen in non-Apes films such as THE POSEIDON ADVENTURE, ARNOLD and THE LEGEND OF HELL HOUSE. His early sixties flick, LORD LOVE A DUCK! became a real favorite. 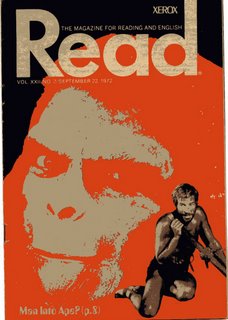 Anyway, my own family never went to the drive-in but when I saw all three Apes movies appearing on one drive-in show, I talked a friend into getting his mom to take us so I finally got to see the first one. The final two were still big deals to me but with diminishing returns. The masks that replaced much of the vaunted make-up from the earlier films made these last two entries looked cheap. The ensuing TV series was well done but seemed to ignore much of the film continuity. I enjoyed collecting the bubblegum cards more than watching the show (but I sold ‘em a couple years ago. Sorry ‘Fink) Star astronaut James Naughton would also later star in the first stage play I ever saw, a summer stock version of BUS STOP with Karen Valentine and Rose Marie. The follow-up cartoon series was so badly animated as to drive the final nail in the coffin of the franchise. 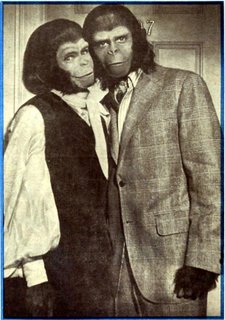 Well, actually that probably came with the death of producer Arthur P. Jacobs who, prior to the film series was known mostly for his association with the late Marilyn Monroe. In the late seventies, I attended a "GO APE" marathon of all five PLANET OF THE APES movies. By the time the Tim Burton remake came out, though, my interest had waned and I passed. Roddy remained a favorite for the rest of his days and I still ctach the classic films when they turn up on TV but the DVD’s hold little interest. Sigh. In the end, I guess you’d have to say that the overexposure of APES was one of my earliest examples of overkill. I hate it when that happens.
Posted by Booksteve at 2:37 PM