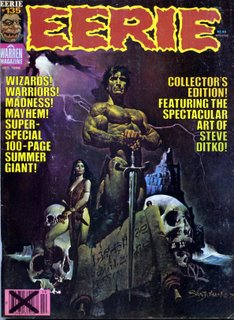 Beneath the heroic Sanjulian cover (which has virtually nothing to do with what's inside)of this 1982 issue of EERIE you will find no less than ten quality horror and fantasy stories all written by the late, lamented Archie Goodwin and all drawn by the legendarySteve Ditko.

By this time, the Warren magazines were spending a lot of time feasting on their own histories. All of these are reprints from previous issues dating back as far as the late sixties but the art is some of Ditko’s best ever. 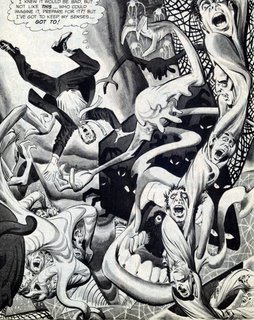 Using a variety of styles he rarely got the chance to use anywhere else, Spider-Man’s co-creator demonstrates a range undetectable in most of his work. Having cut his teeth on Stan Lee’s short monster stories (as well as a ton of similar Charlton shorts), his creative storytelling techniques for these 6 page wonders is a joy to behold. Running the gamut from werewolves and mad scientists to wizards and warriors, the artist’s vaunted imagination is allowed free reign, 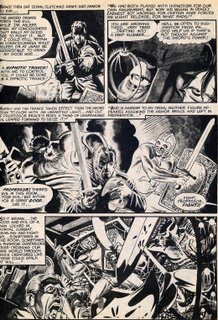 resulting in some incredibly atmospheric scenes as well as some nightmarish images that take his Doctor Strange dimensions a step further. His use of wash is unexpectedly atmospheric 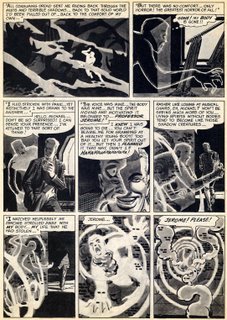 and his layout and inking are stronger in most of these pieces than in anything seen from him since. You can almost feel his enthusiasm for some of these pieces. 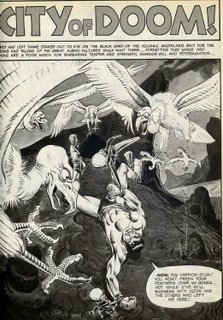 Nothing incredibly original in the plots but Goodwin’s writing is as sharp as ever and Ditko’s art zooms you along at just the right pace for each one. If you’re at all a fan of the mysterious comic genius that is Ditko, you owe it to yourself to seek out EERIE #135.
Posted by Booksteve at 8:09 AM