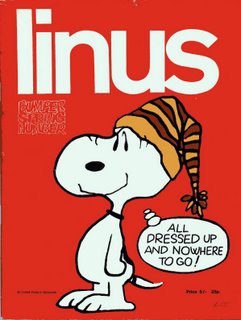 The Italian LINUS is considered to be the most important comics-related magazine in the world...it's my understanding. I've actually only ever seen this one thick issue, a 1970 British edition that I purchased in 1974. In fact, based on the editorial by Michael Bateman, this may well be the FIRST English-language edition. Featuring a combination of contemporary and classic strip reprints as well as brief articles on comics, it was a fun read and I looked for years for other issues to no avail. It starts out with an interesting overview of Charles Schulz illustrated by panels that introduced new characters into PEANUTS over the years 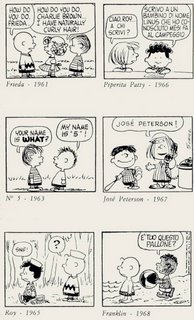 (note "Piperita Patty" Apparently this issue wasn't COMPLETELY translated from the Italian!) and followed by a nice run of 1969 PEANUTS strips. Then there are some full page pieces by various artists including Ralph Steadman, known for his illustrations of Hunter S. Thompson's work. Steadman is actually listed as the art director of the magazine. Here's a link to HIS current website: RALPH STEADMAN dot COM. Next up is a rather adult (although certainly tamer than some of the artist's work) selection from Guido Crepax's VALENTINA. 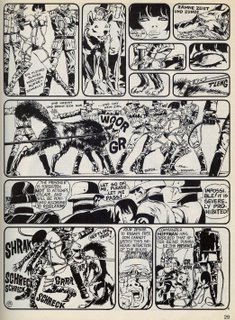 Take one look at this page and tell me Crepax wasn't a MAJOR influence on Frank Miller's SIN CITY! My favorite piece in the issue is THE UPSIDE DOWN WORLD OF GUSTAVE VERBEEK, introducing a 15 page reprint of the legendary 1903 comic strip THE UPSIDE DOWNS OF LITTLE LADY LOVEKINS AND OLD MAN MUFFAROO. 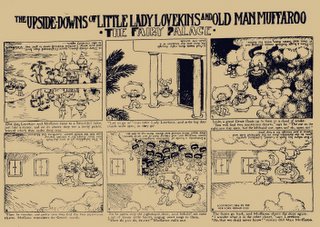 Examples have been trotted out in history books fairly frequently since the seventies but if you haven't seen it, it's a revelation! The artist drew every single strip so that it would both look and read DIFFERENTLY if you turned the panels upside down! Thus the 15 pages here actually represent 30 pages of story! What work! What dedication! What insanity!!! 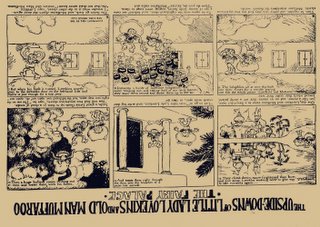 For the example I chose, note that it's printed both ways so you will NOT need to turn your screen upside down. Rounded out by 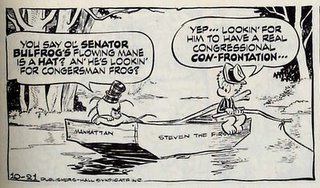 POGO (note the name on the boat!), B.C., THE WIZARD OF ID, FEIFFER and KRAZY KAT reprints, there's also a nice article on Winson McCay's LITTLE NEMO IN SLUMBERLAND. This is accompanied by a folded, pull-out section that's designed to emulate the original size the strips appeared in the Sunday papers a century ago now.

This amazingly cool section suffers only because it's too sparse but it does present a choice selection of little known strips bookended by beautiful full-page, full-color NEMO and, BUSTER BROWN reprints.
Posted by Booksteve at 6:49 AM