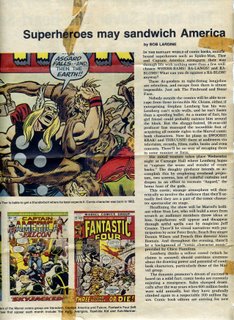 Here’s a 1972 article that I had pasted in a scrapbook for many years. It’s from THE NEW YORK SUNDAY NEWS dated Januray 2nd and deals with comics in general and Marvel Comics and Stan Lee in particular. It’s one of those where you just want to smack the writer for all of the "Zap" and "Pow" references but it does offer some interesting info and quotes that I’ve never seen anywhere else. I’ll leave you to zoom in on the article and read it yourselves but a few highlights include:
A preview of Stan Lee’s then-upcoming Carnegie Hall appearance which would employ "overhead projectors, two screens, lots of colorful curtains and drapes in an effort to recreate ‘Asgard,’ the home base of the gods."
Stan Lee: " Most people feel you must necessarily be a moron to read comic books." " They regard them in the same light as those published in the 40’s. In those days, dialogue was corny and the storylines concerned monsters taking over the earth." (Ummm…and that never happens in comics from the 70’s? Or beyond for that matter?)
Stan again: "We get heavy fan mail each week and 50% of the letters are mostly literate." (Hmmm…Only 50%? And only MOSTLY literate? How exactly does this refute the "moron" theory?)
Dennis Wilson IS the SILVER SURFER! Well, maybe not. Did Dennis KNOW he was supposed to be in a Marvel movie? Was the fact that he was the only 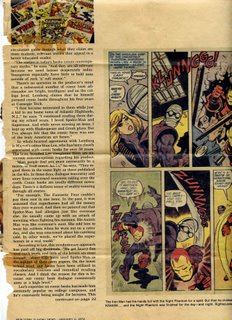 surfer in the Beach Boys the reason he was cast? Was there a script or was this somebody’s pipe dream? Did they SEE TWO-LANE BLACKTOP???!!
The book. What did this grandiose sounding tome that would "stretch comic form to its limits" and still sell for under ten bucks turn out to be? ORIGINS OF MARVEL COMICS?
THOR on radio in little five minute serialized versions. Well, it was a few years later and it was FANTASTIC FOUR (with Bill Murray as the Torch!) but this one DID come true! It’s just that most markets didn’t carry it and in those that did, audiences really didn’t care. Sigh.
All in all, an 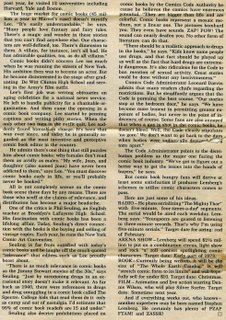 interesting article. My favorite line is when the writer says "These do-gooders in tight-fitting longjohns are relentless, and escape from them is impossible. Just ask the Firebrand and Stone-Face." Has this guy ever read a comic book or did he just pick up the couple current issues Marvel sent over and cite two of the most obscure villains ever? Howzabout "Just ask Doc Doom and the Red Skull?," "...Baron Zemo and Ultron Five?," "...Magneto and Titanium Man!!??" AAARRGGHH!!! By the way, were any of my readers at the Carnegie Hall show? If so, how was it?
Posted by Booksteve at 9:46 AM