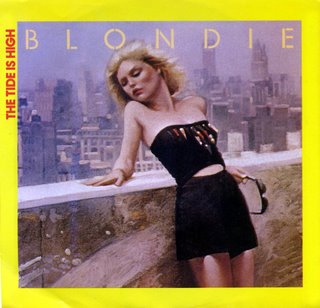 Debbie Harry, to most people, probably IS Blondie. I mean look at her! She's...well... blonde! Dyed, obviously but blonde nonetheless. Has been for more than thirty years. Platinum even!! Debbie Harry, however, is NOT Blondie!This week, Debbie Harry's GROUP, the real Blondie, is deservedly inducted into the Rock and Roll Hall of Fame. I credit Blondie with nurturing my love of creative music videos. In fact, the very first thing I recorded on my very first blank tape on my very first Beta machine in 1980 was Blondie's video for HEART OF GLASS. Some of the last 45's I bought were also by Blondie including THE TIDE IS HIGH, seen here. My absolute favorite Debbie Harry moments, though, were Blondieless. The first was when Harry appeared on THE MUPPET SHOW accompanying Kermit in a bizarre, somewhat off-kilter version of THE RAINBOW CONNECTION. 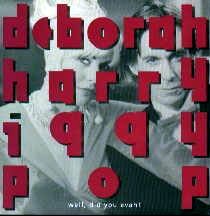 The other was one of my all-time favorite music videos. Done for an AIDS awareness music project based on the music of Cole Porter, WELL DID YOU EVAH? (WHAT A SWELL PARTY IT WAS) is a duet--no! a romp!--with Iggy Pop. The lyrics are changed a bit and the scene changes considerably. There's even a cameo appearance by Rodan. Over the years, through lean times and comeback tours, Blondie's music has resonated with me so congratulations to Debbie Harry...and Blondie! Thanks for everything!
Posted by Booksteve at 6:55 AM