Doctor Who- Journey Through Time 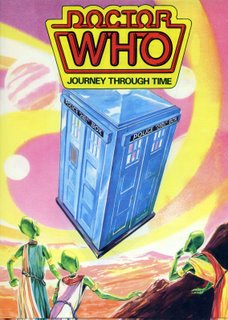 With the imminent arrival of Christopher Eccleston's 9th Doctor on American shores (as well as David Tennant's 10th in the UK), I thought I'd give a quick look back at this book, a 1985 hardcover "bargain" book that looks like nothing so much as a British Annual. 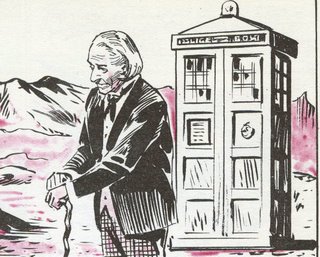 Just as the name implies, Annuals have been coming out yearly in England on popular comics and TV series for decades now, hardcover titles offering an unusual mix of illustrated short fiction and comic strips. That's exactly what we have here. 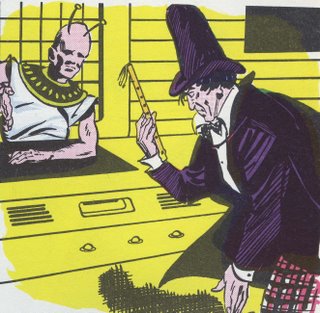 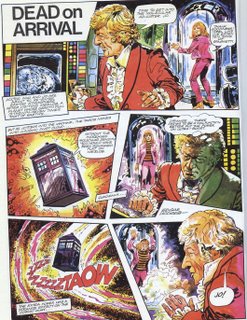 Doctors 4,5 and 6. Being the most recent ones, that makes sense. It was probably presumed that few would even remember the earlier incarnations. Never more than a few pages, the stories are all simplistic and clearly meant for children. The few comics scattered throughout are a bit more adult and probably appeared in contemporary magazines such as the RADIO TIMES. 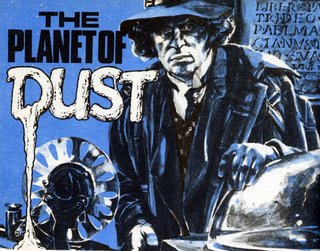 The real fun here is the truly bizarre mix of illustrative styles, ranging from 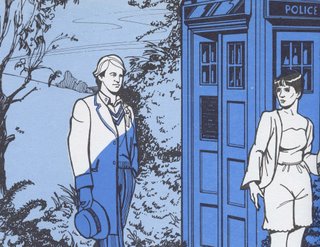 simple children's book line art to fully painted renderings, photo swipes and abstract impressionism. I've scanned one sample from each of the 6 Doctors but they really don't do justice to the mix of art styles. 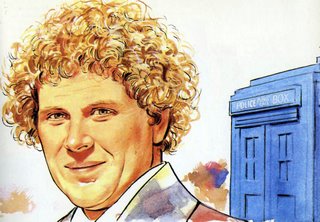 For the record, Christopher Eccleston quickly won me over and became my favorite Doctor. What little we've seen to date of Tennant is very promising though. Beyond that my personal favorites are Jon Pertwee (#3), Peter Davison(#5), Patrick Troughton (#2), Tom Baker(#4), Sylvester McCoy(#7), Paul McGann(#8), Colin Baker (#6) and William Hartnell (#1). I'll always have a spot in my heart for the alternate universe Doctor as played in two feature films by Peter Cushing, though, as that was my very first exposure to the character, the Tardis and the daleks.
Posted by Booksteve at 10:20 AM