It was recently announced that a collection of Harvey Kurtzman’s HELP! magazine is forthcoming and it’s about time! It may not have been as funny as the original MAD (what is?) but HELP!, published by Jim (FAMOUS MONSTERS) Warren, is most definitely the most interesting project with which Kurtzman was associated after EC. Featuring Harvey’s frequent collaborator, Will Elder, HELP! is where we met GOODMAN BEAVER who later had a sex-change and became LITTLE ANNIE FANNY. It’s also where all of those 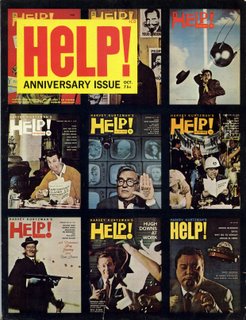 underground guys got their start, appearing in the Public Gallery section. Crumb, Lynch, Shelton and others all first hit the big time in HELP! Big names flocked to be on the cover. Seen here alone are Jerry Lewis, Jackie Gleason, Jonathan Winters, Dave Garroway and Mort Sahl. Initially, Harvey’s Assistant Editor was Gloria Steinem who went on to be America’s leading feminist and found MS. Magazine. Her replacement was one Terry Gilliam, future Python and leading filmmaker. In fact, one could argue that Gilliam’s crucial involvement in Monty Python stems directly from his getting John Cleese, then appearing on Broadway, to appear in a fumetti for the magazine.
What is a fumetti, all you Americans ask? Well, it’s a form of picture comic strip that has appeared for decades in Mexico as well as in Italy and other parts of Europe but has always been looked on as a less-than-successful novelty in the US. In HELP!, Kurtzman regularly included fumetti strips, written and photographed by his staff (and guest writers such as sci-fi author/editor Algis Budrys) and featuring a number of celebs and folks who went on to be celebs. The anniversary collection seen here (issue 21) is an all-fumetti reprint issue. The strips are little more than slightly suggestive sketch comedy but feature such well known (at least in the early sixties) actors as 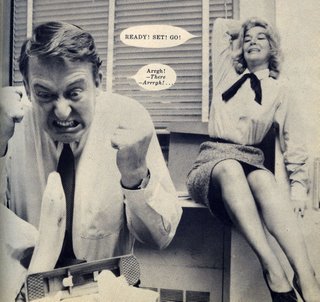 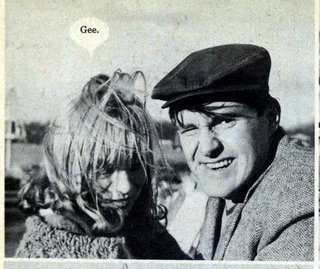 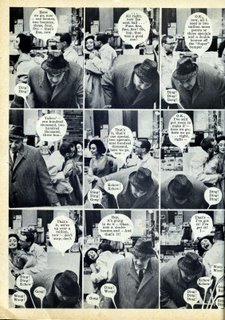 and Sylvia Miles. Comic artist Russ Heath appears in one. Future film director Henry Jaglom appears here as an "actor" also. I once spoke with James Hampton (F TROOP, HAWMPS), who also appears in several fumetti and he was genuinely amazed and surprised that anyone remembered these things at all! 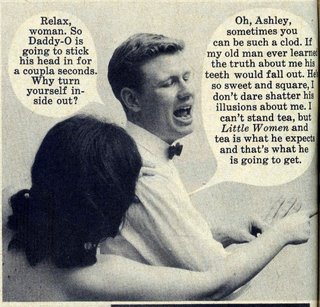 Although not included in this collection, the very young John Cleese appeared in perhaps THE classic strip as a man who falls for a Barbie doll.
With the demise of HELP!, Kurtzman’s experiment with photo comics ended. Every once in a great while, someone has tried to revive the format. Superfans Jim Engel and Chuck Fiala did a Fumetti strip for years in THE COMIC READER and it was later collected. Marvel did a startlingly unfunny and hard to see fumetti one-shot and even a few independent comics have been photo-based. As I said, though, in the US, it’s all novelty.
If you’re mature enough, check out The Groovy Age of Horror which has often run samples from some of the more successful European-style fumetti. Then keep your eyes open for the upcoming return of HELP!.
Posted by Booksteve at 9:12 AM