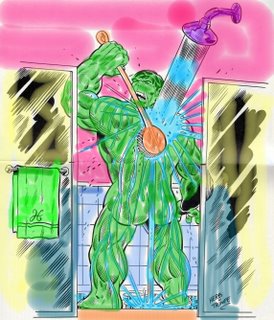 Okay, so it's Saint Patrick's Day. Why does that mean that every blog and his brother (Ted. Nice guy.)has to write about Green Lantern or Green Arrow or even the Green Hornet? What about the best known Green guy of them all, the one and only Incredible one himself, the Hulk? Here's classic seventies Hulk artist Happy Herbie Trimpe's politically incorrect (and colored incorrect by me) pinup of Ol' Greenskin...showing more green skin than usual. From a 1975 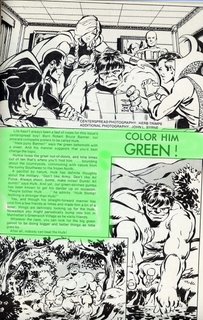 issue of Bob Layton's CPL, we also include the brief text piece that originally accompanied this centerfold along with a couple of illustrations by some upstart newcomer named John Byrne.
Posted by Booksteve at 9:58 AM