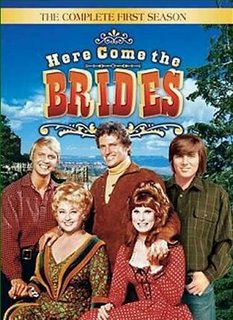 One of my favorite sixties TV series has always been HERE COME THE BRIDES in spite of the fact that I haven’t seen a single episode since a brief syndication run about twenty five years ago. Billed originally as a non-musical TV version of SEVEN BRIDES FOR SEVEN BROTHERS, I didn’t hold out much hope for the show as that was perhaps my least favorite musical of them all. Strangely, the reason I got a chance to see the first episode at all was that the local ABC affiliate stuck it on a Sunday afternoon so they could put more lucrative local programming on in prime-time. Thus, I was visiting an old friend (from kindergarten yet!) and we had just come in from killing each other out in his back yard for about an hour and plopped at the TV.
HERE COME THE BRIDES is the story of the three Bolt brothers, Joshua, Jeremy and the oldest, Jason. They "own" a mountain and a lumber business in 19th century Seattle but they’re in danger of losing a lot of their lumberjacks as there are no marrying women around. Thus, to save the family business Jason makes a deal with rival Aaron Stempel that he will travel by ship to Massachusetts and return with 100 potential brides. Once the girls arrive in the West, the stories take over and the colorful characters carry them along for two seasons.
Jason was played by Robert Brown. With an over-the-top theatrical delivery and a larger than life smile, Jason is the father figure of the show, setting himself above it all in a way. A pre-STARSKY AND HUTCH David Soul was the hot-headed Joshua Bolt and brother Jeremy, the shy, stuttering type, was played by Bobby Sherman. 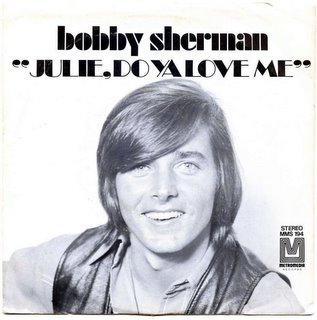 Right there was the secret to what there was of the show’s success. Bobby’s sensitive performance got him noticed and his records made him the flavor of the month teen idol for a couple of years. In retrospect he wasn’t really that got at either acting or singing but my 4th grade girlfriend loved him and I stuck with the show (and bought his records) because of it!
Mark Lenard, STAR TREK’s beloved Sarek, was ostensibly the villain of the piece as Aaron Stemple but even he got a few good moments and turned out not to be such a bad guy after all. Delightful newcomers Bridget Hanley and Susan Tolsky were the two main "brides and the main cast was rounded out with the double act of Henry Beckman as the scene-chewing, tipsy Captain Clancy and the great Joan Blondell as Lottie, the innkeeper at the heart of the series. Guest stars and semi-regulars included Bo Svenson and even Bruce Lee!
In spite of the lack of available reruns, a small but fiercely loyal fanbase has kept the show’s memory alive all of these years. 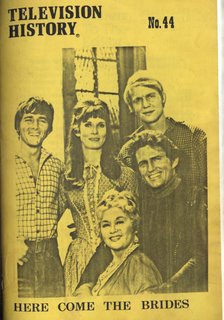 The magazine seen here from 1990 was one of the few I’ve seen with a lot of coverage on the show. The STAR TREK novel seen here, ISHMAELby Barabar Hambly from 1985, is perhaps the single strangest spin-off of all time. Spock goes back in time, loses his memory and ends up in old Seattle, living with Aaron Stemple (who, as you’ll recall, was played by the actor who played Spock’s father!) and working as a lumberjack! 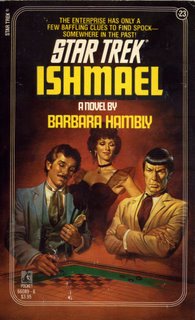 With appearances by Lottie, Clancy and the Bolts, the whole novel is basically an episode of HERE COME THE BRIDES!! It’s also completely uncredited as such. No trademark notices, no thank you’s, no indication at all to the casual reader that this is anything but another STAR TREK book. A fascinating idea, though, but it does make one’s head hurt when you realize that Stemple, although resembling Spock’s father, is portrayed as the ancestor of Spock’s earth mother instead!
Here’s a couple links for you to peruse: http://www.bridgethanley.net/
http://aa.1asphost.com/CTVA/US/Western/HereComeTheBrides.htm and just for the fun of it, a nifty cheesecake shot of Joan Blondell from about thirty years before she appeared as Lottie-

Then check the stores in May for the just announced DVD first season collection of HERE COME THE BRIDES as seen above. Finally, a chance for a whole new generation to discover the series!
Posted by Booksteve at 10:12 AM