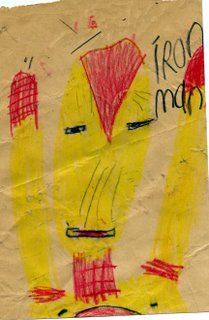 Yesterday, the always amazing Robby Reed over at DIAL B for BLOG (and I thought it was ME that didn't have a life!) ran a number of impressive examples of IRON MAN artwork by current IRON MAN artist Adi Granov. Living in the past as I tend to do happily,I'm sorry to say that I was not aware of the artist's work. Within minutes of seeing it, however, his take on the bulky, original Iron Man armor was adorning my desktop as my wallpaper of the day. Quite impressive work! Much moreso than my own Iron Man artwork, seen here. Drawn in either first or second grade, I had discovered a batch of old issues of TALES OF SUSPENSE at Keith's Carryout, a dark little liquor store/mini-grocery across the "bad" side of the next corner. Their old comics went for ten whole cents when Mrs. Osborn (down at the opposite, "good" corner) sold hers for a nickel! Still, Keith's had stuff I'd never seen before including two mint condition copies of AMAZING SPIDER-MAN # 8 (which I promptly ripped the covers off of and poked holes in so I could store them in a binder for safekeeping. OUCH!) I was enamored of early Iron Man, though. 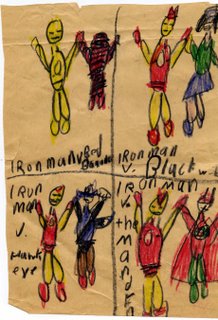 Note the different armors I drew. In case you can't read my scrawl, the villains pictured with our metal hero are the Red (sic) Dynamo, the Black Widow, Hawkeye and the Mandarin. Why they're all doing the wave I have no earthly recollection!
Posted by Booksteve at 8:47 AM