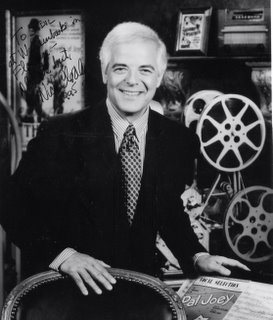 One of the wire service reports on George Clooney’s OSCAR win noted that the actor’s father was "a former newscaster from Cincinnati." I’m afraid that’s not giving Nick Clooney enough credit. Nick Clooney came from the talented family that gave us radio singer Betty Clooney and her even more successful sister, Rosemary, legendary recording artist and star of WHITE CHRISTMAS. If anything, Nick Clooney was even more multi-talented than his sisters. He, too, went to Hollywood. IMDB lists his one movie appearance as THE HIGH COST OF LOVING, a 1958 picture directed by and starring his then brother-in-law, Jose Ferrer (Rosemary’s husband and comics fan Miguel’s dad!). His big role was "man in parking lot." He does get a line, though, and one cheeky local movie host once ran the scene on a loop for days after showing the film. 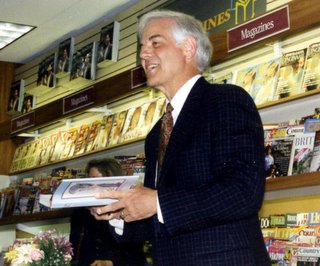 I once asked Nick if that was the only film he made, however, and he assured me that there were, in fact, several others but that he had been a day player and wasn’t even certain what they were about! He did say that the working title of one had been "MURPHY’S SLED." Your guess is as good as mine. Either way, Nick chose to head back to the Midwest where he became a popular second banana (his term) on not one or two but three separate local talk/variety series before being offered his own show in 1968. That show was out of Columbus, Ohio and while it didn’t last long, it led directly to THE NICK CLOONEY SHOW premiering on Cincinnati’s WCPO shortly afterwards. After a few years, that show switched to WKRC (after a year-long break due to a non-competitive clause) and continued with a few new regulars but otherwise intact. Nick would sing, there were comedy sketches, local commercial pitches and bigger and bigger celebrity guests as the star honed his considerable interviewing skills. Sometimes, his wife and kids…yes, including George…would even appear. While all of this was going on live five days a week, Nick would occasionally trod the boards in dinner theater, host local charity events and he even found time to host the short-lived network game show, MONEY MAZE (note the MONEY MAZE TV mag cover I'm showing him in these photos). 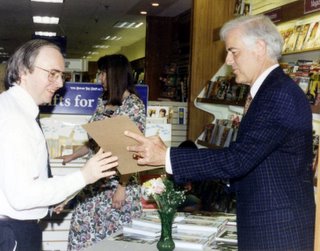 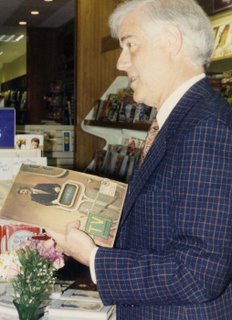 Needless to say, a break was needed. In this case, that break came when Nick became the anchor of WKRC’s local news! At first a seeming joke (later Cincinnati would develop a reputation for making former Mayors into news anchors…including Jerry Springer) Nick pulled together a great news team and took the news to the top in local ratings. The genuine sincerity he had brought to his commercials, songs and celebrity interviews served him well in the new position and awards were won for several years. Eventually, a carrot was dangled and the West Coast wanted him back…only as a newscaster. He packed up all and moved to California where he became just another newscaster in a very big pond. After a good run there, Nick returned to the Cincinnati/Northern Kentucky area yet again, this time taking a position as a disc jockey on a nostalgia radio station and beginning a long-running stint as an all-purpose columnist for THE CINCINNATI POST. In his spare time (!) he commuted out of town to become an on-camera movie host at AMC.
In 1995, Nick Clooney published the collection of his columns seen here. Some are folksy, some political, some have showbiz stories and some have family anecdotes. All of them are entertaining. Note that the cover art here is by George Clooney. 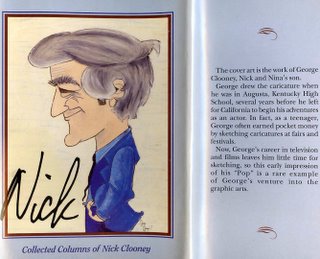 I was managing a bookstore when the collection came out and thought Nick would be good for an autographing. I had known his wife, Nina, off and on for fifteen years at that point (which remains another story for another time) and I had spoken to Nick on the phone but I had never met him. It looked as though it would remain that way, too as he announced that his schedule didn’t have time to do any autographings. Luckily, I didn’t ask him…I asked Nina. She talked him into it and we set the date!
They arrived on that Saturday afternoon to one of the biggest crowds we had ever had at the store and proceeded to take over the day. Both Nick and Nina were impeccably dressed and had more charisma than any ten people I had ever met! People continually congratulated him on George’s success and he beamed like a proud father should. He joked that George hadn’t been on a magazine cover that month so he had called and told him, "Your career’s over son, Come home." He had agreed to stay an hour but he smiled until the very last customer got his signature. One employee from out of town couldn’t figure out what all the excitement was about at first but by the end she was totally enamored of the man. She took most of the pictures seen on this post except this one, 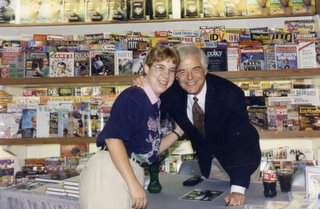 which I took of her. Then he took me aside and whispered that he was sorry he wasn’t his usual self but that they had just come from a close friend’s funeral! I assured him that we had all found his boundless energy and friendship simply amazing but nonetheless, he insisted on returning the following Monday night to "make it up" to me! 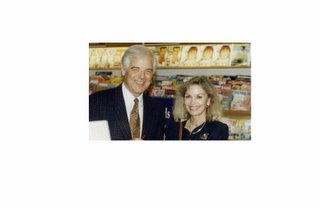 With little time for publicity, when Monday came he arrived early, stayed late and again worked the crowd like the professional he is. When folks heard Nick Clooney was in the house, the crowd grew. We sold hundreds of his books!
Nick continued his column, went on to host more TV movie shows and ran for Congress here in Northern Kentucky! My wife and I campaigned for him but in the end I’m kind of glad he lost as I think he has too much honesty, ethics and integrity to succeed in that cutthroat world.
When Rosemary Clooney died, my wife sent a simple condolence card to Nick and Nina. As I’ve said, we’ve met them on a number of occasions and I’m pretty certain they’d know us on sight but probably not recognize our names. A few weeks later, we received a handwritten thank you card from Nick with 3 sides of reminiscences about his sister. Let me repeat: HE DOESN’T REALLY KNOW US! This tells me that he did this for every single one of the probable hundreds of condolence cards he received. 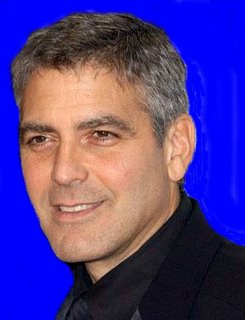 I’ve never met George Clooney but he stole my first job out from under me. A new mall was opening in 1979 and he and I both applied for the shoe department in the anchor department store. George got it, reportedly was lousy at it and quit after a few months. I had to settle for beginning my long bookstore career that eventually led me back to that mall for 9 years. By that point, George was a star. The only really bad thing I’ve ever heard about him is that he has an ego. He couldn’t survive long in Hollywood without one. Actor, producer, director…he continues to grow in all aspects of show business, just like his father. With a role model like Nick Clooney, who could expect anything but success!
Posted by Booksteve at 11:15 AM