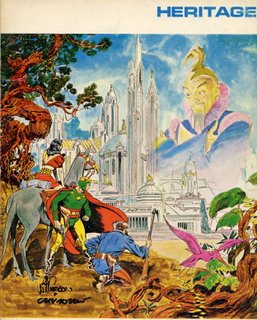 In 1972 there were two improbably numbered (1A and 1B) issues of a FLASH GORDON fanzine called HERITAGE. Among the folks involved with this first class publication were Bruce Hershenson (later publisher of the East Coast Comix EC reprints), Doug Murray (later a comics writer and, I believe, involved with the Creation conventions) and Larry Ivie (legendary fan and publisher of MONSTERS & HEROES magazine). The quality and influence of the FLASH GORDON comic strip had kept it in the collective minds of fandom all along but during this period the television release of all three of the Buster Crabbe movie serials undoubtedly fueled the demand for this sort of thing. I do not have nor have I ever even seen a copy of volume 1A. The only thing I understand to be in it is SMASH GORDON by Frank Brunner which I’m pretty sure also appeared in THE MONSTER TIMES. An index to both volumes published in B also cites work by Frazetta, Kaluta and Jeff Jones.
What I do have, though, is the wonderful second volume, topped by an incredibly beautiful painted cover by the strip’s greatest fan, Al Williamson, done in collaboration with Gray Morrow (and possibly Roy Krenkel)! The back cover is yet another Wally Wood piece 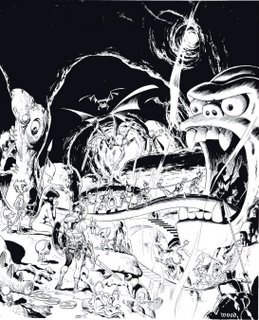 with a heck of a lot going on in it. In between you’ll find more work by Williamson along with Australian artist Stan Pitt, 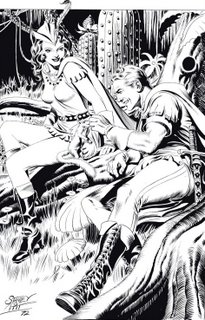 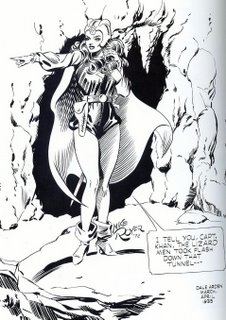 , Reed Crandall and others, all uncensored and featuring lots of topless babes. The highlight of the whole enterprise, though, is a vintage magazine article about the strip’s creator, Alex Raymond, one of the most influential artists of them all.
Perhaps the most fascinating pieces are those of Mr. Adams 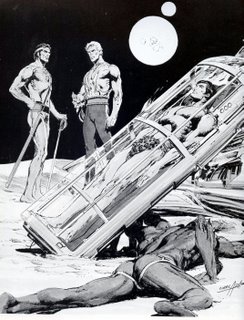 as they wordlessly present a meeting between Flash and Edgar Rice Burroughs’ John Carter, going so far as to present a captured Tarzan in the final page. I’ve often wondered for what these pages were originally intended.
The inside front cover clearly indicates that more issues and/or spin-offs (Heritage Spotlight) were intended but to the best of my knowledge, this/these were the only issues.
Posted by Booksteve at 10:03 AM