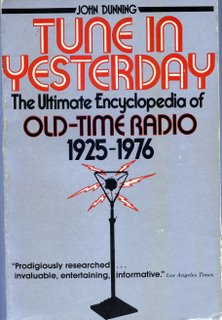 In Spring, a young man’s fancy turns to love. If you’re my age in the Cincinnati area, it turns to old-time radio. With the 20th Annual Cincinnati Old-Time Radio and Nostalgia Convention coming up this month, I’ll be posting a number of pieces on OTR leading up to the big weekend. If you aren’t a fan of so-called "old-time radio" it’s probably because that word "old-time" has prejudiced you against it. Dramatic radio, aptly called the theater of the mind, is rapidly becoming a lost art and the only way to preserve this wonderful, unique entertainment medium is by getting more young people interested. That’s what happened with me when a substitute teacher in Junior High one day brought in an LP of THE SHADOW. I’d heard of it but this got me interested. The stories unfold in your head and if they’re well written, your own mind supplies much more realistic detail and special effects than movies or TV ever could. Like everything else, according to Theodore Sturgeon, 90% of everything in OTR was probably drek but that ten percent that wasn’t can be simply amazing! THE SHADOW, THE WHISTLER, ESCAPE, SUSPENSE, GUNSMOKE, YOURS TRULY, JOHNNY DOLLAR, X MINUS ONE and I LOVE A MYSTERY are all legendary for their good writing and great performances. Jack Benny, Burns and Allen, Baby Snooks, Amos ‘n’ Andy, Red Skelton, Martin and Lewis, Abbott and Costello and Bob Hope were all hilarious on radio. There were also such long-running comedy series as THE GREAT GILDERSLEEVE, THE ALDRICH FAMILY, DUFFY’S TAVERN, FIBBER McGEE AND MOLLY and YOU BET YOUR LIFE with Groucho Marx. Norman Corwin (subject of this year’s Academy Award-winning Best Documentary), Carlton E. Morse, Himan Brown and Orson Welles himself were among the auteurs whose careers were made in radio. If all of that isn’t enough to get you to try it, we haven’t even discussed THE LONE RANGER, SUPERMAN, THE GREEN HORNET, THE BLUE BEETLE, POPEYE and other familiar heroes. 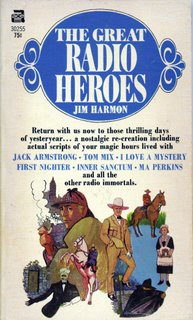 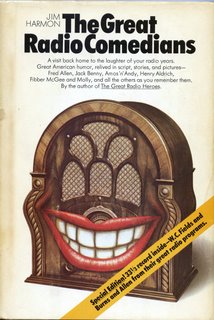 Seen here are a selection of great books to seek out at your local library, used bookstore or Ebay account. Jim Harmon’s THE GREAT RADIO HEROES and THE GREAT RADIO COMEDIANS were among the first to recall the then still recent glory days and Harmon has worked tirelessly for much of his life to make sure they don’t fade away completely.
THE BIG BROADCAST hit at the beginning 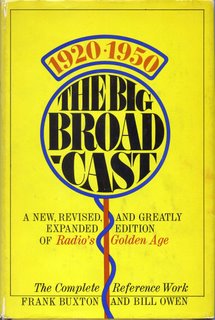 of the oft-mentioned nostalgia boom and offered an encyclopedic (if somewhat error-ridden) look at individual shows.
Mystery author John Dunning’s 1977 TUNE IN YESTERDAY took the encyclopedic concept into much more detail and became an oft-pilfered public library reference volume. As with any volume of this type, there were a few errors. Dunning himself took his time but corrected them by literally rewriting the entire book as ON THE AIR-THE ENCYCLOPEDIA OF OLD-TIME RADIO, a weighty tome 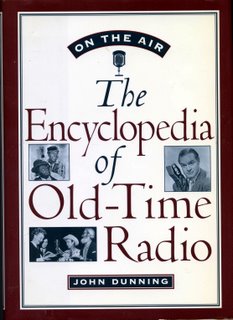 published some twenty-one years later in 1998.
Here are a couple of links to sites where you can find free OTR on the ‘Net: datajunkie, RadioLovers.com - All Shows . If you haven’t discovered it yet, I envy you. A million new worlds are waiting to be unlocked in your mind.
Posted by Booksteve at 12:02 AM