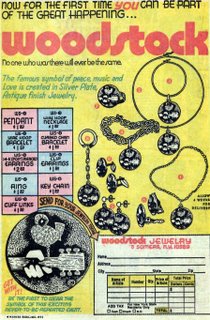 Hmmm. Came across this ad in DC comics dated March, 1971. "Now for the first time , YOU can be part of the great happening..." Uh...well...not really. It took place in the summer of 1969 and I'm pretty sure that even Yasgur's farm had been cleaned up by the time Kirby was doing JIMMY OLSEN. Certainly Janis Joplin and Jimi Hendrix were already dead by the time this ad was running! And, uh, how does it allege that YOU can be part of this happening? By sending money to a company that no doubt had no affiliation with anyone in the Woodstock generation and was probablyrun by a couple of old guys just trying to cash in! Not only that, the overpriced (for its day) junk jewelry isn't even really that cool looking! In fact, if the movie hadn't come out in 1970, most of America...of ANY age...would perhaps have already forgotten the Festival if they hadn't actually been there! And believe me, junk jewelry is not a substitute for peace, love and music!! I once had an employee who swore to me that at 14 she ran away from home to go see Janis at Woodstock. I asked her how it was and she said she was told she enjoyed it but that the brown acid really wasn't specifically too good.
Posted by Booksteve at 7:08 PM