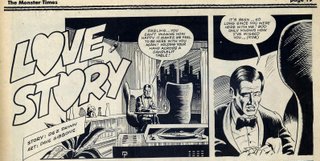 Most comic book fans probably discovered illustrator Dave Gibbons with WATCHMEN, Alan Moore’s super-hero magnum opus originally published in twelve issues starting in 1986. If you were paying attention, you might have already been following his GREEN LANTERN work in the US or even his work for the long-running weekly 2000 AD and later the (supposedly) monthly WARRIOR in the UK. Presented here, however, is something you’ve probably never seen. It isn’t really a story, it’s a gag and not a particularly original and/or funny one at that. LOVE STORY originally appeared (at least in the US. Don’t know if

there might have been a prior UK fanzine printing, perhaps?) in the tabloid pages of THE MONSTER TIMES way back in October,1974! Already, you can recognize his super-clean style that makes even the most horrible comics bloodbath a little easier to take. Credited writer is Dez Skinn who went on to be the heart and soul behind the ground-breaking WARRIOR magazine which debuted V FOR VENDETTA and Moore’s revisionist MARVELMAN amongst other memorable features. Skinn wrote a history of undergrounds a few years back and Gibbons, of course, went on to a

memorable career as both a writer and an artist, most recently, I believe, involved in some of the mess that is DC's aptly named INFINITE CRISIS. 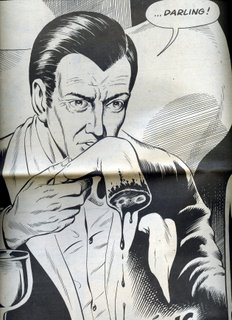 Posted by Booksteve at 6:43 AM