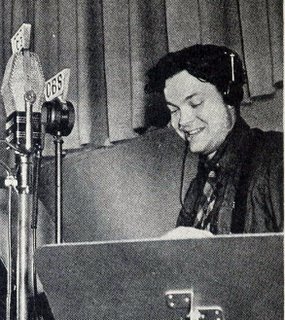 Was Orson Welles a genius? Probably. He thought so, anyway. Acclaimed endlessly by film buffs, the average person nonetheless remembers Welles for THE WAR OF THE WORLDS, CITIZEN KANE and a series of wine commercials. That’s about it. Most of the books on his career wax eloquent for chapter after chapter on KANE and a few other pictures, give considerable coverage to the sci-fi "hoax" and barely mention that Orson Welles was one of the superstars of his day…on radio!
From THE MERCURY THEATER ON THE AIR to THE CAMPBELL PLAYHOUSE (which was the same series only sponsered) to his classic performances of THE HITCHHIKER and DONOVAN’S BRAIN to his later ADVENTURES OF HARRY LIME and THE BLACK MUSEUM, Orson’s voice was always a welcome sign of quality on radio. Many of the best episodes of THE SHADOW even feature Orson in the title role. 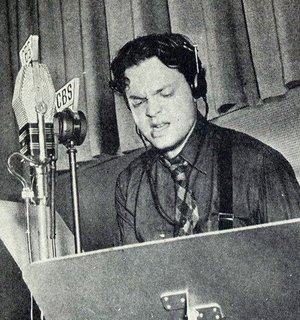 In 1942, Orson spoofed his own "boy wonder" image when he guest-hosted several sequential episodes of THE JACK BENNY SHOW to help out its ailing star. The "maestro" jokes continued for weeks afterwards and Maurice LaMarche’s portrayal of the megalomaniacal Brain from the cartoon PINKY AND THE BRAIN came from Orson’s self-fostered image as a control freak. 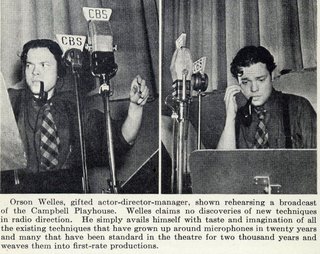 In later years, Welles rarely spoke of his radio career (although a MERV GRIFFIN SHOW reunion with his estranged partner John Houseman was memorable!) but when Peter Bogdanovich published his memoir of the great man, the audio book consisted of a fascinating series of interviews recorded over a period of years in which he did go on at some depth about radio…although his memories often didn’t jibe with the facts. 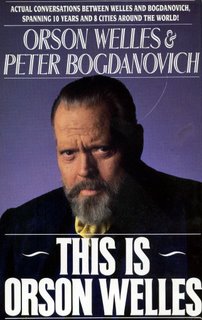 Orson claimed eventually that the 1938 WAR OF THE WORLDS was a purposeful hoax but I don’t believe it. It was just another episode like all the others only using some new techniques to make listeners relate instead of having it set in the 1800’s. 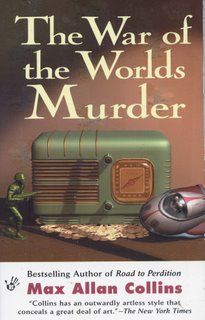 This past year, former DICK TRACY scribe Max Allan Collins published the fun mystery novel, THE WAR OF THE WORLDS MURDER in which Welles, although a suspect, teams up with Walter Gibson, the pulp writer and magician who created THE SHADOW, to solve the murder of one of his two mistresses.
On radio, he was a great producer, director and writer. In film, he never quite achieved that same level of overall greatness but in death his legend is taking on mythological proportions. Was Orson Welles a genius? As I say, he himself thought so and he did a damn good job of convincing us! (The black and white pics above, by the way, come from the 1940 book RADIO DIRECTING.)
Posted by Booksteve at 12:06 AM