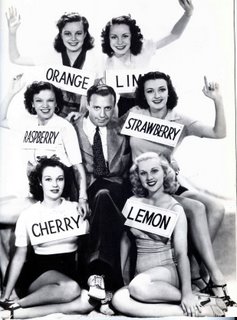 One of the coolest things about Old Time Radio was the integrated commercial. This was where the commercial was worked in as an integral part of the show itself. Usually done this way on comedy and variety series, someone would often mention the sponser's product and then for the next few minutes discuss it while seemingly continuing the regular storyline. Jack Benny excelled at this on his show, notably for Lucky Strike cigarettes in later years but also for various earlier sponsers including Jello in the early forties. Announcer Don Wilson would inevitably find at least one way to sneak in the litany of "strawberry, raspberry, cherry, orange, lemon and lime." Here's a publicity photo from this period that looks more than a little dirty to me somehow. Maybe it's the fact that the signs draw attention to the girls' chests, maybe it's Jack's lascivious look. Maybe it's Miss Strawberry's finger. Maybe it's the "Cherry" name so often used for porn stars. I don't know. I just know I feel sorry for the girl that got stuck being the lemon . The Cincinnati OTR Convention starts tomorrow and we'll have a report tomorrow evening.
Posted by Booksteve at 12:37 PM