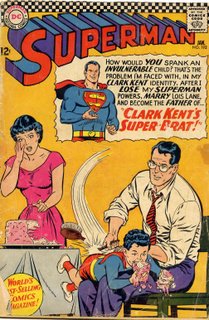 SUPERMAN #s 192 and 194 (with a pre-scheduled 80 Page Giant of reprints in between)appeared in late 1966 and featured an issue and a half of what was for years my favorite "imaginary story."
Drawn by Curt Swan and an unknown inker (GCD says probably George Klein but it sure looks like Pete Costanza in spots to me) the story is probably by Otto Binder. Don’t let the cover fool you. This is ultimately a tragic story. "Clark Kent’s Super-Brat" on the cover becomes simply his "Super-son" inside although part one is entitled "The Brat of Steel" for no apparent reason as Clark, Jr. isn’t particularly bratty at any point. In the beginning, Supes runs afoul of a rare hybrid kryptonite that cause him to slowly lose his powers and then his memory. The world comes to mourn the Man of Steel and Clark at long last makes some headway with Lois lane. The two are married and move into Clark’s old apartment. Even as Lois is moving in, Clark tells her he has to leave for Tibet to follow up a lead on the missing superhero. Ultimately he is stranded there for years and ends up with a long beard tilling the crops at a lamasery. 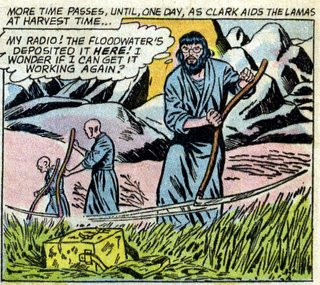 When he finally is rescued, Clark returns home to find he has a surprisingly super son (born "a few months after you left America" says Lois. Hmmmm….Remember, they had JUST come back from their honeymoon! The scandal!). Note the near obligatory Bat-plug. 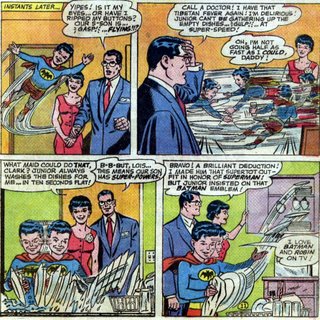 Lois theorizes that Junior drank some super potion among Clark’s Superman souvenirs and Kent buys this. After only a couple of pages more, Clark is off for two more years, this time as a foreign correspondent! He returns one panel later as we see this is just an excuse to have his son age a bit. Here we have the bizarre exchange

where Clark asks him what’s on one page in a certain encyclopedia volume, he answers for a different volume number then tells Clark his answer is actually in a THIRD volume!! AND KENT AGAIN BUYS THIS WITHOUT QUESTION. HAH!
By the end of the issue, Clark has helped piece together a documentary about the Man of Steel and all of the other DC heroes attend the premiere, prompting Batman and Superwoman(sic) to break the fourth wall and tell the readers they were keeping quiet to see how Clark got out of his mess! Bizarre! 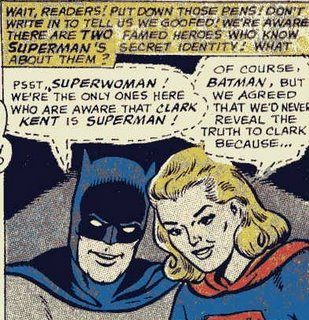 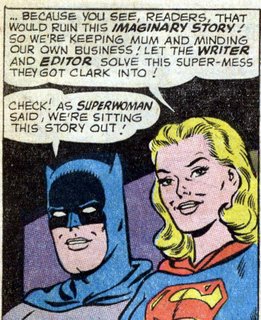 Apparently neither the writer nor the editor even realized that most of the rest of the JLA knew Superman’s identity in their own book, too. The issue ends after even more time has passed and Clark is sitting alone watching his documentary on the late show when suddenly one of Superman’s hidden robots responds to a command from his master on film and bursts forth out of his secret closet causing Clark’s memory to return at long last! Continued next ish! 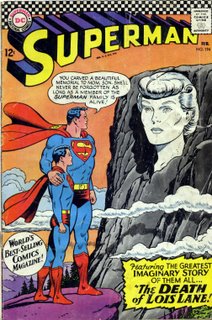 Next issue being titled, "The Death of Lois Lane" is a giveaway that this will not be more light-hearted hi-jinks with the new Superboy. No, here we have an aging well Lex Luthor kidnapping Clark and Lois, finding out Clark’s secret identity before he even tells his wife, then programming her to kill Clark. She tries to shoot her still-powerless husband while he’s driving 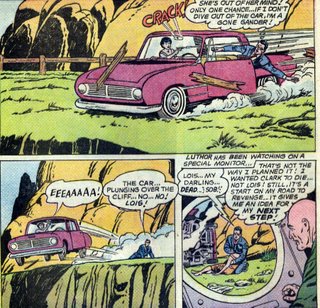 and he dives out of the car letting her plunge to her death over a mountainside! Then things get really tricky as Luthor takes control of the super robots in an effort to trick Junior into murdering his own father! This is getting sick! He convinces Clark that he and Lois had had an affair BEFORE she and Clark were wed. 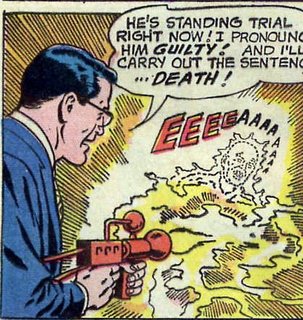 decides to pull a Judge Dredd on ol’ Lexy and just blows him away! Of course, in the best Comics Code tradition, he then has to self-destruct, also, leaving father and son to carve the memorial that we’ve already seen on the cover, all of this leaving 9 empty pages in this issue which are rounded out with a fifties reprint.
Y’know, when you look at it like that, maybe I should choose another favorite. After all, as Alan Moore reminded us many years later, aren’t they ALL really imaginary?
Posted by Booksteve at 2:48 PM