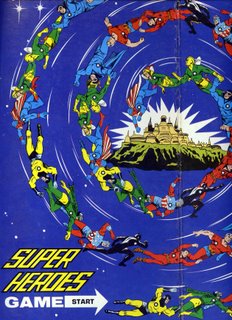 If you’ve been reading comics newssites recently, Marvel and DC are once again claiming trademark ownership of the term "super-hero." As I recall, this issue originally surfaced in the late seventies when Archie Comics put out their special Super-Hero Digests. The big guys yelled, "Cease and desist!" Okay, so Archie had always referred to their line in the sixties (Fly-Man, Black Hood, Shield, etc.) as "Ultra-Heroes," not "Super-Heroes." Or did they? Seen here is detail from a 1966 Transogram children’s board game called simply SUPER HEROES. Note that these are Archie heroes-Fly Man and Fly Girl, Black Hood, Mister Justice, Captain Flag, the Web, The Shield, the Fox, the Jaguar and Steel Sterling. How they settled on these particular characters for the board, I’ll never know. The Jaguar was from the early sixties and hadn’t even been published during the mid-sixties boom. The Comet would’ve rounded out the appearance of the popular MIGHTY CRUSADERS but he doesn’t appear. In his stead are three 1940’s characters who had only barely been revived in cameos in the nigh legendary Jerry Siegel tale "Too Many Super Heroes" (Hah! There’s that term again!) in MIGHTY CRUSADERS number four that same year. I don’t think there’s any actual lawsuits floating around on this issue and I certainly don’t claim any legal expertise. I know that a trademark gone unused for a certain period of time is considered abandoned and could conceivably be trademarked by others. Perhaps, since Archie hadn’t published hero comics for more than a decade, DC and Marvel’s lawyers felt justified in their legal maneuvering. I will say that at the very least it looks like a precedent to me for Archie to get in on the action!
Posted by Booksteve at 8:19 AM