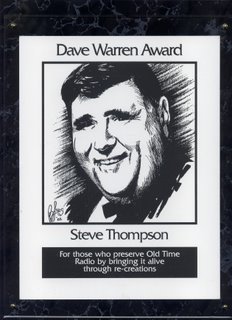 "Big Dave" Warren had an ear for voice talent. He was the founder and director of The Dave Warren players, an ad hoc group of amateur performers put together at various nostalgia conventions as needed to re-create old radio shows. In 1989, Big Dave was brought in to critique the work of G.R.A.C.I.E., the old-time radio re-creation group co-founded by my wife and myself with Carolyn and Joel Senter, Karl Litzenmeyer, Dan Nather and Robert and Barbara Newman. Carolyn knew and had been inspired by Dave when she came up with the initial idea for our group and brought him in to watch us after we’d already had several rehearsals. We won his seal of approval right off the bat and he gave us a number of helpful tips. Perhaps more importantly, he cast me in the lead role of Jack in his own LET’S PRETEND adaptation of THE BRAVE LITTLE TAILOR to be performed at that year’s Cincinnati Old-Time Radio and Nostalgia Convention. The rest of our group filled out other roles in TAILOR including my wife playing my mother. Dave Warren Players veteran Gary Yoggy played one of the bad giants. I also got to be Fred Allen in an ALLEN’S ALLEY skit and a sidekick to the great cowboy hero, TOM MIX. 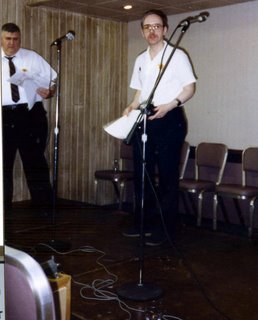 By the following year, G.R.A.C.I.E. had disbanded and it simply never occurred to me that I might get another role so we didn’t even attend on the first day of the convention. When we did arrive on day two, Big Dave let me have it with both barrels for not being there the day before and immediately inserted me into a part in ESCAPE, making me promise never to miss auditions again. For various reasons, many of which I don’t even know, The Dave Warren Players were supplanted in Cincinnati by annual open auditions and our excellent, long-time, nurturing director Don Ramlow. Dave, himself, however reappeared as actor occasionally and, at one point in the late nineties, cast and directed two AMOS ‘N’ ANDY re-creations for which I was chosen in advance to play important secondary roles. Dave Warren was also known as an illustrator whose work appeared on numerous radio-related small press mags and, in later years on cassette packages. Dave died a few years ago and, in tribute to him and his continuing influence, the Cincinnati Old Time Radio and Nostalgia Convention came up with the Dave Warren Award for those who preserve old-time radio by bringing it to life through re-creations. Gary Yoggy, who carries on the Dave Warren Players in Newark, was the first winner with director Don Ramlow the second. 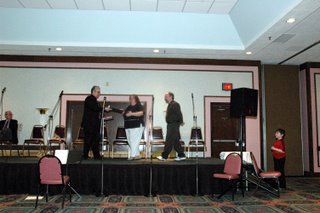 Last year in Cincinnati, my wife Rene and I won the dave Warren Award. We were pleased and surprised to receive joint plaques from previous winner Ramlow, leaving me, in one of those rare moments, quite speechless. 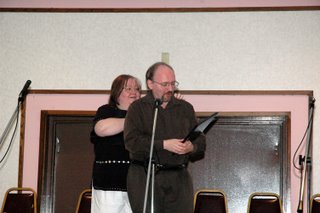 Today was day one of this year’s Convention and Hal Stone, radio’s Jughead, was drafted at the last moment to cast and direct everything as Don Ramlow was on site but confined to bed with an unexpected illness. Out of the several re-creations being cast, I have once again, after 17 years, been cast in major roles in two. Tomorrow, I’ll play the prissy Mr. Bright, voiced originally by Joe Kearns, in the light-hearted 1948 SAM SPADE episode, "The Fairly-Bright Caper." Rene has been cast against type as a witch in the same re-creation. Perhaps best of all, however, I will be portraying outlaw Burly Scott in the LONE RANGER episode, "Burly Scott’s Sacrifice" opposite original LONE RANGER (and DICK CAVETT SHOW) announcer Fred Foy as the Masked Man and Karen Hughes as my daughter. Karen, the ultimate Jack Benny fan, played the same role at age 11 at her first Cincinnati Convention ALSO with me as her father and Foy as the star! Nostalgia within nostalgia!
Posted by Booksteve at 10:28 PM