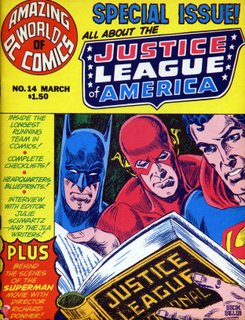 Before he began writing comic books himself, later Marvel stalwart Mark Gruenwald was known as a great continuity buff, finding reasons and explanations for fitting comics together. He had a gift for somehow making a hundred stories of a character by a dozen different writers actually work…well as best as anyone could, I guess.
One of my favorite pieces by Mark is the extensive Justice League of America Reader section in the 14th issue of the official house fanzine, THE AMAZING WORLD OF DC COMICS, published in 1977. Written in several separate sections that deal with the history of the series, behind the scenes of the series, who knew whose secret identity when, cutaway headquarters maps, a checklist and a long list of guest stars, my favorite section consists of the individual bios of each JLA member. It’s there, in a remarkable and no doubt non-canonical (and yet undeniably sanctioned by DC itself) series of paragraphs that Mark Gruenwald dares to go on record with exactly where the JLA members reside!
AQUAMAN- Okay, a no-brainer. From Atlantis, described as "a domed city beneath the Atlantic Ocean."
ATOM-Ray Palmer’s college-based Ivy Town is logically said to be in Connecticut.
BATMAN-Now here’s where it starts to get interesting. Gotham City, Batman’s base of operations, a clear parallel to New York City (long known as Gotham), is said to be in New Jersey!
BLACK CANARY ran her alter ego Dinah Lance’s flower shop in Star City, Massachusetts.
THE ELONGATED MAN traveled a lot in his own occasional series and is said here to have no home base.
THE FLASH, on the other hand, runs through Central City…, OHIO???
GREEN ARROW is, of course, in the kitchen with Dinah in Star City, Massachusetts.
GREEN LANTERN’s original base of operations, the pre destruction Coast City, was

logically in California.
HAWKMAN flew through Midway City, Michigan. Midway to what?
MANHUNTER FROM MARS, in his earlier John Jones identity is said to have operated out of Middletown, Illinois.
RED TORNADO does not list a base city.
SUPERMAN-Who knew that Metropolis, yet another NYC variation, was to be found in Delaware? Wouldn’t it be bigger than the state itself?
WONDER WOMAN, at the time of this issue, was working at the UN in the only REAL city mentioned here-New York City.
It’s a shame Mark Gruenwald passed away a few years back. I’d dearly love to see a detailed map of the US in the DC Universe and I’m not at all certain anyone else could do it half as well.
Posted by Booksteve at 8:13 PM