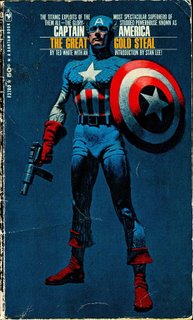 Now here's a novelty--something I not only have never owned but had never even seen until this morning! This CAPTAIN AMERICA paperback was one of two Marvel novels to come out in the mid-sixties. The other was THE AVENGERS BATTLE THE EARTH WRECKER. Now THAT one I had--twice! Written by Otto Binder, best known for his sci-fi novels and his comics writing for CAPTAIN MARVEL and SUPERMAN (was this his only Marvel-related work?) I couldn't get into it when I bought it used in 1970 (10 cents!) so I tried again some years later (seven dollars) but still didn't care for it. I had heard about the CAPTAIN AMERICA one all along but never saw a copy at a convention or anywhere else! Then, this morning, this turned up on datajunkie, a marvelous site that I have been remiss for not mentioning during my radio period as they have been consistently posting dozens of OTR shows--in some cases entire series!--online for our enjoyment (if we had all the time needed to listen to all of them anyway). Today's post offers some SUSPENSE episodes and then a whole run of just really cool sixties and seventies mass market paperback covers--including this one. Ted White wrote the novel. I knew his name at the time only from his chapter in ALL IN COLOR FOR A DIME but he had been a BNF (Big Name Fan) in sci-fi fandom for years. He went on to be a respected sci-fi novelist and essayist as well as an early editor of HEAVY METAL. If I recall correctly, White was more than a bit into the counterculture. It would be interesting to read his particular take on Cap in the sixties. Today, as Dr. Progresso, Ted White maintains an online presence with a fascinating music website. Check him out!
Posted by Booksteve at 8:58 AM