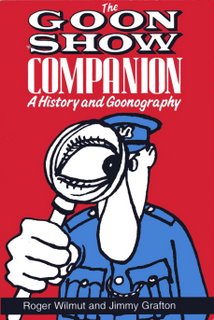 Another early favorite of mine on radio turned out to be an import-THE GOON SHOW. NBC ran it on US radio in the mid-fifties and it appeared again in the late seventies/early eighties on public radio (which is when I discovered it). This British series offered a half hour festival of total nonsense each week, presented at breakneck speed and with no apologies by the brilliant 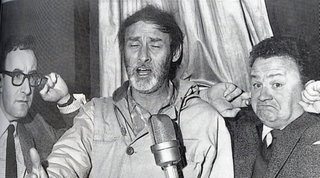 combination of (l to r) Peter (I’m gonna be a big star someday) Sellers, Spike Milligan and Harry Secombe. Secombe was usually the hapless, high-pitched hero, while Sellers and co-writer/creator Milligan played everyone else. From week to week the characters were the same ones…only completely and totally different. The plots were simple excuses for silliness, broken up regularly with a song from Ray Ellington and a harmonica solo from max Geldray. THE GOON SHOW was the audio equivalent of Harvey Kurtzman and Will Elder’s "chicken fat" style comedy that threw everything at the wall to see what looked funniest when sliding down.
Peter Sellers’ memorable characters included Hercules Grytpype-Thynne, Major Dennis Bloodnok, Henry Crun and the popular Bluebottle, a young boy who read his own stage directions aloud.
Milligan was Count Moriarty, Minnie Bannister and Eccles, the big dumb doofus character. 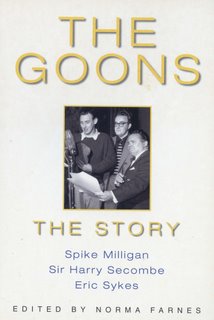 Secombe played the thinly disguised Neddy Seagoon, one week a sailor, one week a spy, one week a doctor, one week an everyman and every week an ingenuous loser who runs afoul of one or more of the other two’s characters.
THE GOON SHOW was a clear forerunner of Monty Python and a joy to listen to once you get the hang of its non-linear continuity. Sellers, in particular, is amazingly inventive with his voice characterizations and even BBC announcer Wallace Greenslade is regularly drawn into the buffoonery. Prince Charles is on record as a long-time GOON SHOW fan and in 1972 was instrumental in arranging what was billed, when later released on LP, as THE LAST GOON SHOW OF THEM ALL, reuniting a now very religious Secombe, Milligan after years of mental health issues and Sellers as arguably one of the biggest superstars in the world. It was amusing but you really can’t go home again.
Posted by Booksteve at 11:35 PM