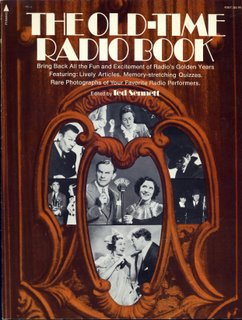 After immersing myself in WVXU’s radio classics, I knew I had to see what else was out there so I began mail-ordering tapes from Jim Harmon, Radio Showcase and Foothill Video in the early eighties. Eventually, I saw more of an idea of what radio was really like and I discovered westerns, crime shows, kids shows, detectives, movie adaptations and even more comedies that I just loved and ordered regularly. I bought a whole cabinet just to house the growing hundreds of tapes! By the late eighties, I even had my own 1930’s giant old-time radio, given to me by the husband of an ex-employee just because I was the only young person (twenty-something at the time) that he ever met that knew anything about OTR! It still works, too. The problem is it picks up Bon Jovi and not Bob Hope! Damn!
Anyway, today a selection of fine images of a few folks who went on to be some of my personal radio favorites. All of the shots came from the book pictured at left which came out in 1976 (and was discovered by me about fifteen years later). 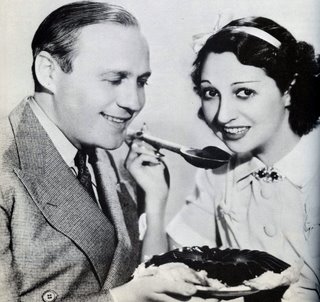 Jack Benny, to me, wasn't a radio star. I grew up with Jack as a TV star, first with his series, then in specials, guest shots, talk shows and commercials. Jack was definitely "in the now" and not some leftover piece of nostalgia. I had heard of his radio fame (and films for that matter) but all I knew was TV and I loved Jack. Not long after Benny died, I got an LP for Christmas (1976) that featured the feud between Jack Benny and one Fred Allen. I wasn't at all familiar with Fred but he too quickly became a favorite and I became more and more intrigued by Jack Benny's busy past. With the original Benny series on WVXU running mostly fifties episodes at first, I began mail-ordering thirties and forties episodes and slowly piecing together the real appeal of Jack Benny as the world's longest running gag! (I hope that ugly stuff Jack and Mary Livingstone are pretending to enjoy is Jello.) 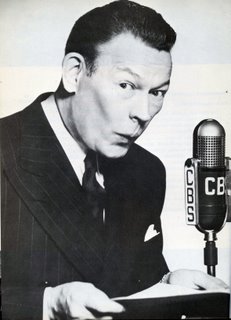 After Jack, I began ordering Fred Allen tapes, immersing myself in Allen's Alley and all of the various permutations of his show from the thirties through the late forties. Allen was sarcastic, intelligent, unflappable. I found out that he had written two autobiographies and found them easily but the real gem was a collection of Fred's letters. These personal correspondences to and from tell his story better than his own books and at times can be wittier than Oscar Wilde at his best! Fred, after all, was known for his quick, scathing wit. Once, after getting off a good one to Jack in their long-running mock feud, Benny reportedly shouted back "You wouldn't talk to me like that if my writers were here!" Fred was his own writer (although he did have others including future best-selling author Herman Wouk) and while he played characters and did sketches on his shows, the best parts were when he simply mocked the news of the day in exactly the way Jon Stewart does these days. 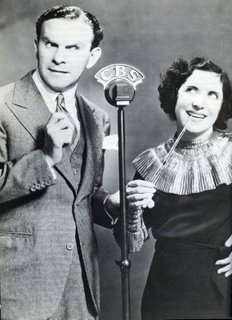 George Burns was also someone I grew up with. In fact, Oscar winner George Burns was at something of a career peak, surprisingly enough, after more than five decades in show business when I discovered Gracie. Gracie (Mrs. George Burns) Allen was one of the funniest women on radio. She made Lucy's later TV characters look like MENSA candidates. Burns and Allen took their Vaudeville act to radio very early and became so popular that Gracie actually ran for President in a mock campaign in 1940, appearing on dozens of other series to to plug her campaign. She actually got a ton of write-in votes! (Here's a nice look at GRACIE ALLEN'S 1940 PRESIDENTAL CAMPAIGN along with the full text to Gracie's probably ghostwritten book, HOW TO BE PRESIDENT.) George was content to give Gracie the spotlight and play straight man right up until her retirement in the early sixties. In one memorable episode, Burns was in jail and a detective was questioning him. The exchange went something like this:Detective-"Okay, Mr. Burns, let's start with what do you do for a living?"
George- I’m married to Gracie Allen.
Detective- No, I mean, how do you make your money?
George- I’m married to Gracie Allen.
Detective-OK, let’s try a different approach. How did you come to end up in jail today?
George-I’m married to Gracie Allen
Detective-You’re giving me a headache.
George-Here. I always keep a pocket full of aspirin.
Detective-Thanks but why do you keep a pocket full of aspirin? George-I’m married to Gracie Allen. 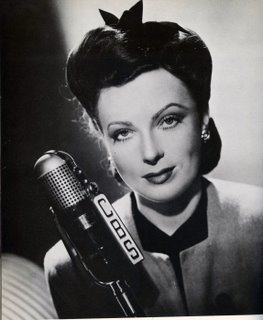 The woman in this picture scared me as a child when she played Endora, Samantha's mother on BEWITCHED. She was always wearing bizarre outfits and over the top makeup and turning people into chimpanzees or something. I had not the slightest suspicion of her past as arguably the "first lady of radio." Agnes Moorehead was Orson Welles's associate and appeared with him in many of his early radio and film triumphs (including as Margo Lane to Welles' Lamont Cranston on THE SHADOW) but she went on to make a name for herself, perhaps most memorably in the oft-repeated (and by that I mean re-enacted as tape repeats didn't exist!)SORRY, WRONG NUMBER , a near solo tour-de-force in which she plays an invalid who picks up a misplaced call on her phone and hears someone plotting a murder.
THE ALDRICH FAMILY became a favorite after I was cast in the role of sidekick Homer in a re-creation opposite original Henry Aldrich, Ezra Stone. I plan on writing about that in more depth later. The show itself was formulaic sitcom. Henry’s a good kid who somehow causes a misunderstanding that spreads through his father, mother, sister, teacher, friends and/or total strangers until it becomes a hilariously gigantic mess. This is the plot of just about every single 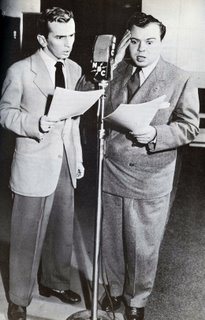 episode of the fifteen or so years of THE ALDRICH FAMILY but it works due to the ingratiating characterizations by Jackie Kelk as Homer (left in photo) and Ezra Stone who could still approximate that teenage croak into the 1990’s! Kelk, by the way was also radio’s original Jimmy Olsen on THE ADVENTURES OF SUPERMAN. Stone, having started out behind the scenes with Broadway producer George Abbott, went on to great success as a TV director including many episodes of THE MUNSTERS and LOST IN SPACE. 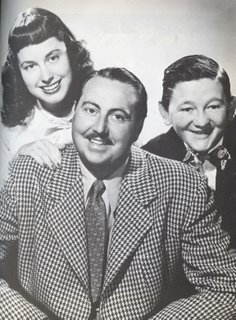 Finally, we’ve already written extensively of THE GREAT GILDERSLEEVE recently and run several nice pictures of Hal Peary who originated the role. Here, though is a delightful publicity shot of latter day Gildy Willard Waterman along with Walter Tetley as Leroy and Marylee Robb as Marjorie. Waterman was also Gildersleeve on TV in the fifties and became a successful stage star in later years. He was the first OTR star I ever met and one of the most gracious gentlemen I’ve ever encountered.
Posted by Booksteve at 7:46 AM