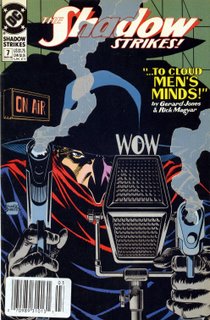 Here's a nifty little treat for radio buffs that must have gone right over the heads of the average comic book reader in 1990. In issue number seven of THE SHADOW STRIKES, one of several attempts by DC since the 1970's to bring the pulp hero to the comics, Gerard Jones (later author of MEN OF TOMORROW) allows the title character a run-in with his OTR self in the person of Orson Welles (who in real life didn't originate the role but WAS one of its better known stars). Well, Grover Mills actually but then even that's a reference to the New Jersey town in Welles' legendary WAR OF THE WORLDS. The plot deals with the flamboyant actor-producer-director coming up with a radio series based on the exploits of the Shadow. When the Shadow hears about it, he pays its star a visit with a cease and desist warning only to be drawn into a chase with some criminals. The Welles character utilizes his radio shtick to trick the villains and the dark avenger realizes that having a radio show in which he seems to have even more powers than he has might be of some value to him. There are in-jokes galore for the radio and film buff and the issue ends with a three page history of the radio series by its biggest fan, radio expert and sometime DC colorist Anthony Tollin(who, of course, colored this issue also!). Jones' stories are always backed up with a wealth of knowledge and the art is passable, changing as it does from Rick Magyar to Frank Springer's scratchier style about two-thirds of the way through. This is dollar box stuff but well worth it for the comics fan, the old-time radio buff or particularly the OTR loving comics fan like me!
Posted by Booksteve at 7:02 AM