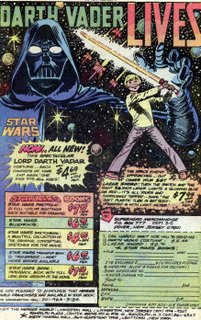 Could be. This ad appeared in comic books in the Spring of 1978, nearly a year after STAR WARS unintentionally revolutionized the American movie-going experience. Credited to the then new Joe Kubert School, this sure looks to me as though it's done by DC's ace war artist himself. The off-model Darth Vader was more than likely drawn that way on purpose as the ad states that the Sith Lord costume consists of mask and cape (with hood, perhaps?) After all, you don't want the kids expecting a helmet when all you're sending them for their hard-earned GRIT-selling money is a cheap mask and a thin cape with a hood. If this is a legitimate ad, and it almost appears to be in spite of the lack of any 20th Century Fox trademark indicators, why then is the lightsaber referred to as a SST Lazar (sic) Sword?
Posted by Booksteve at 10:46 PM