Silly me. I already ran a piece om HARVEY a while back. Oh well, here we see my OWN giant rabbit who lived with us from the late seventies into the mid-eighties. His name was Sidney Australia or, in the vaguest OTR tie-in of them all, Cedric Weehunt, the name of a character from radio's LUM AND ABNER. Sidney (note the lack of "y")was my choice for name, Cedric was what my father always called him. Around 1978, the landlord in our building asked me to 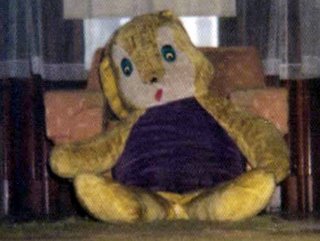 help clean out an apartment. It seems the quiet, softspoken, mousy little girl that lived there left the place strewn with half-melted candles, exotic alcohol bottles, incense ashes, black light Kama Sutra posters and one four and a half foot tall stuffed rabbit! The landlord said I could keep anything I wanted so the rabbit came to live with me (along with the Kama Sutra posters but that's another story. Hotcha!) Growing up, I had never had stuffed teddy bears like most kids. My parents had always bought me stuffed bunnies for some reason so to me this was the ultimate manifestation of that. Although he's sitting on the floor in front of it here, Sidney sat in that gold colored chair in the living room for years like it was a throne. On Easter, he would supervise the egg hunts. We'd usually dress him in a tie. Visitors were naturally fascinated by him and often posed for pictures with him (usually holding him up by the ears). My mother put up with him but never really seemed to warm up to him and eventually, entropy being what it is, Sidney began to lose his stuffing and fall apart. He had to go. It was like losing a member of the family. We got rid of the chair around the same time as it reminded us of him every time we saw it. Now, though, it's good to recall our rabbit friend. They say every family has its secrets. The fact that we had a giant stuffed rabbit named Sidney Australia (or Cedric Weehunt) for nearly ten years was one of ours!
Posted by Booksteve at 10:21 AM