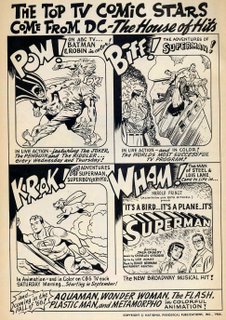 With all of the comics ads being printed on various blogs, I'm surprised I haven't seen this early favorite of mine from mags dated June, 1966. Lag time being what it is in publishing this ad must have been prepared around the time of the BATMAN TV series January debut at the latest. Add in the fact that comics were dated about three months in advance and this was probably on the stands in April (a fact confirmed by on sale dates in other house ads). In April, the "New broadway musical hit!" Superman play also plugged was still in tryouts in Philadelphia. It would eventually make it to Broadway but close in July after a relatively short run. The fact that the George Reeves SUPERMAN series was still being heavily promoted some 7 years after his death led to whole new generations of us impressionable youngsters getting caught up in the outrageous rumors of what happened to him once we did finally hear about it (usually from well-meaning parents or evil older brothers). The SUPERBOY series mentioned here was the Saturday morning Filmation series that featured the voice of perennial radio convention favorite Bob Hastings, then just finishing up his long-running stint on McHALE'S NAVY, as the young Clark Kent/Superboy. Again, keeping in mind that the phenomonon that was BATMAN couldn't possibly have been anticipated at the time this ad was being prepared and yet if you look at the bottom, DC was clearly planning on expanding their TV presence come fall! Aquaman, Wonder Woman, The Flash, Plastic Man and Metamorpho "in colorful animation!" When fall arrived, Aquaman joined Superman on the Saturday morning show and a series of rotating cartoons featuring Flash, Hawkman, Green Lantern, Atom (again voiced by Bob Hastings), the JLA and the Teen Titans rounded out the series. Wonder Woman wouldn't get animated until SUPER-FRIENDS in the seventies, likewise Plastic Man. The latter made sense as his revival in 1966 didn't really spark. He would get his own fairly poular cartoon in the seventies, though while poor Metamorpho had to wait all the way until the next century for his animated debut on Cartoon Network's JUSTICE LEAGUE UNLIMITED.
Posted by Booksteve at 9:32 AM