Lois Lane in the Fourth World 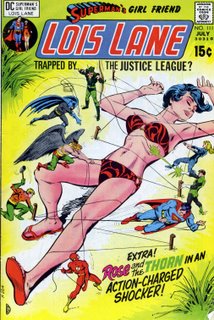 Jack Kirby’s so-called "Fourth World" books in the early seventies (NEW GODS, MISTER MIRACLE, FOREVER PEOPLE and JIMMY OLSEN) would, of course, have long-ranging effects in the DC Universe, particularly in the Superman titles. At the time, however, they were pretty much ignored by all of the other editors and writers with one notable exception. Legendary DC writer Robert Kanigher seems to have taken a liking to the concepts as they began to appear in the LOIS LANE issues he wrote. A mention here and there of Intergang, Morgan Edge, Darkseid, the Black Racer and, in the issue seen here, a full-scale plot based on "The Project" from Kirby’s JIMMY OLSEN. It seems that the mini Justice Leaguers seen on the cover are little "DNAliens" who tie Lois up on page two literally just long enough to put a drop of something on her lips that’s designed to make Superman go berserk when she kisses him. 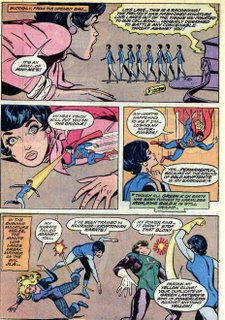 They later show up at her apartment but our intrepid heroine is prepared, having called the Project herself. They send her a bunch of, in Lois’ words, "Mini-me’s" specifically designed to save the day. Note that nothing is ever said here or in any other issue about what happened to either the mini-Leaguers or the mini-Loises. The Project somehow knows about the lips issue, too, and sends Lois a special lipstick that automatically stops the problem of the Man of Steel freaking out, just in time to leave room for a better written and really nicely drawn 8 page ROSE AND THE THORN story with art by Gray Morrow. Kanigher’s writing on this back-up strip was consistently better than on his Lois stories. Lois is depicted as a TV interviewer (although still working at the Daily Planet for some reason) who cares deeply about poor people but spends every waking (and sleeping for that matter) moment dreaming of Superman. 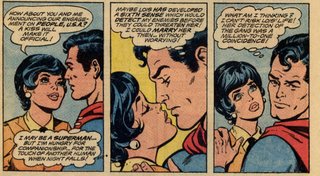 Superman is likewise mooning over her the whole time! If E. Nelson Bridwell weren't the editor during this period, I'd swear the whole "story" was one of Julie Schwartz's famous "Draw the cover and then figure out how to fit it into the issue" bits. Lois looks good here with her seventies hairdo and fashions, provided by veteran comics artist Werner Roth, probably best known for a long, workmanlike stint on Marvel’s pre-revamp UNCANNY X-MEN.

Roth’s Superman, however, appears to have been too off-model as most of his appearances, as with Kirby’s Man of Steel in the actual Fourth World titles, are obviously redrawn and/or heavily retouched by Murphy Anderson (along with at least the Hawkman head in the panel seen here, too!)
Around this time, I actually had a letter published in LOIS LANE mentioning a lot of these issues. I’m not sure now what it said, though because A) I don’t seem to have a copy of the issue anymore and B) as I recall, DC edited out anything negative I had to say and what was left was mostly praise for ROSE AND THE THORN.
Posted by Booksteve at 9:26 AM