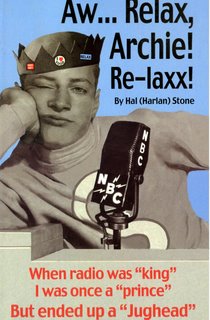 Bob Hastings came to the Cincinnati Old-Time Radio and Nostalgia Convention in its 4th year and they did a re-creation of ARCHIE ANDREWS, the comic book-inspired radio series for which he was best known. Oddly enough, I had rented a dealer’s table that year and did not perform in that re-creation. I say oddly enough because a couple of years later when Bob was also the guest, another ARCHIE ANDREWS re-creation was done and this time I was assigned the pivotal role of Jughead in an episode centered around that character. (My wife played Betty) A couple more years pass, Bob is back again, another re-creation being cast. The director tries to be fair and give others a chance but let’s be honest, I was the obvious Jughead (and I’m not sure how to take that) so I was cast again. This time, original Betty, Rosemary Rice, was also a guest. The following year, though, one Harlan Stone, radio’s original Jughead was persuaded to come as a guest. I first met him in the hallway of the hotel and explained that I had played Jughead twice. We then proceeded to do dueling Jughead voices for several minutes. He said that if he got tired during the evening’s performance, it was good to know he could call me up from the audience to fill in. 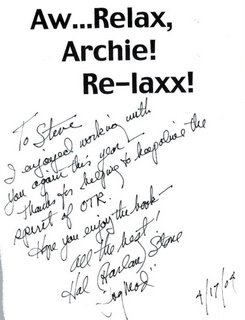 Hal Stone is one of the most naturally ingratiating and funny men I have ever met. He became a regular at the convention after that and I’ve always looked forward to seeing him. Unlike many celebrities, Hal lives in the present. He tells great stories of "the good old days" but he prefers to deal with today. His informal autobiography, pictured above, is one of my favorite OTR related books and that’s where you’ll find most of his great anecdotes about life, radio and television.
Hal brought a limited number of copies to the convention at first and I kept missing them. Finally, in 2004, I grabbed the last copy in the dealers room, just before I had to hurry off to a re-creation. I arrived early and there was already a group on stage. Not wanting to be conspicuous, I sat in the back row…next to Hal. He saw the book in my hand, sighed and whispered "Now you’re gonna want me to sign it." With a flourish, he pulled out a pen and wrote the nice inscription seen here, then tossed it back in my lap as if he were just so put out having to do all that work.
Hal’s due back in Cincy this month (Bob and Rosemary, too!). I can’t wait. As far as I know you can still order copies of his book here:By Gone Days Press
Posted by Booksteve at 8:55 AM