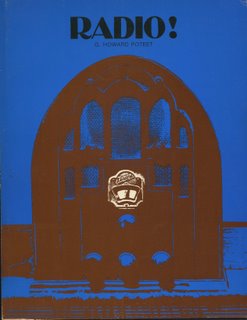 This thin 1975 volume from a small publisher was more of an attempt at a quick cash-in on the nostalgia revival than most. It presented only the slightest historical bits about the medium and its stars, rounded out with actual scripts (or in some cases transcripts) and padded with lots of newspaper ad reprints. Now these were interesting but still padding, mostly ads for purchasing radios. The scripts here included THE ALDRICH FAMILY (a less than steller episode featuring the chracter of "Dizzy" even though Henry's sidekick was "Homer" for most of the run), QUIZ KIDS (guest-starring "little Jackie Benny."), GANGBUSTERS and JACK ARMSTRONG, THE ALL-AMERICAN BOY who was quite the rage again during the seventies revival itself but is back to being a trivia question today.
Posted by Booksteve at 7:16 AM