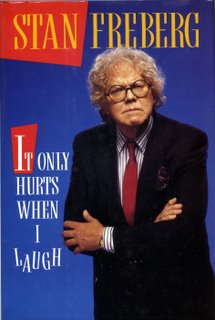 Humor is a very subjective thing. Some people laugh at Nichols and May, some at Larry the Cable Guy. Some find Monty Python just silly and yet laugh uproariously at Benny Hill. Rarely does that twain meet.
One person that many people don’t seem to "get" is Stan Freberg. Me, I find him hilarious!
THE STAN FREBERG SHOW was, I believe, the last network radio comedy, replacing Jack Benny’s long-running series in 1957. It came on the air with a memorable theme song, "This is the first show of the series, a brand new radio series…" and every episode continued with that trend right up until the end where we had "This is the last show of the series, of a failed radio series…". Stan had already done some radio, cartoons and TV puppet shows but was best known for his comedy records such as ST. GEORGE AND THE DRAGONET, JOHN AND MARSHA and THE BANANA BOAT SONG, many of which were performed on the series along with new material that was often more satire than parody. Daws Butler, June Foray and Peter Leeds, his cohorts on record, all joined him on the series but Freberg was, I believe, just too hip for the room.
After radio, Freberg continued to put out comedy albums through the early sixties boom in that genre but also got into advertising where he created scores of intelligent and memorably amusing commercials for radio and television. In 1988, he put out his autobiography promising an as yet unreleased second volume. 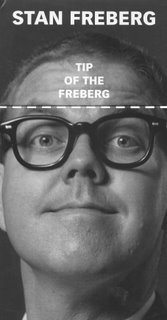 Even better was the boxed set that Rhino put out in 1999 featuring 108 of Stan’s best comedy records, ads and clips from the radio series, along with a video presenting 17 of his most unforgettable TV commercials.
Over the decades, he continued to act, too, appearing on everything from THE MONKEES to ROSEANNE. When former JEAPORDY host Art Fleming died while hosting the syndicated old-time radio series, WHEN RADIO WAS, Stan was brought in as a replacement not sounding a day older than he did on his own series. Check your radio this very evening and you’ll find Stan Freberg still presenting classic radio five decades on.
Posted by Booksteve at 5:13 PM