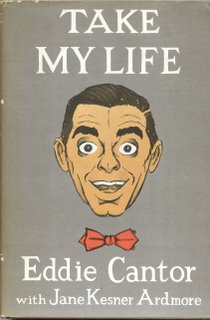 This morning, TCM ran a marvelously entertaining 1936 movie entitled STRIKE ME PINK starring Eddie Cantor. Keaton, Chaplin, Groucho and Stan Laurel all lived long enough to see their legends rediscovered by later generations. Apparently, Eddie Cantor, in spite of living until 1964, did not live long enough. Today, Cantor is a trivia question even among many OTR buffs but at one point he was most definitely a first-stringer. In the early part of the twentieth century, the comedian known for his trademark "banjo eyes" had made a name for himself in vaudeville, on early recordings and in Ziegfeld’s Follies on Broadway. He even starred in his first film as early as 1926 and made his first radio appearance not long afterwards. He was one of the founders of the famous March of Dimes charity and an early president of the Screen Actors Guild.
In character and in real life, he wore his heart on his sleeve and, unlike other comedians of the day did little to disguise his Jewish background. He sang in a high pitched voice while dancing a silly little dance (originally in blackface a la Jolson). His series was reminiscent of his great friend Jack Benny’s in that he surrounded himself with talented performers and wasn’t averse to them getting the applause from time to time. 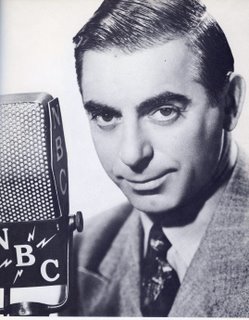 Everyone knew his wife was Ida and that they had a house full of girls. It became as much of a running gag on radio as the Crosby boys. Among those talents discovered by Cantor were comedian Bert (The Mad Russian) Gordon and singers Deanna Durbin, Dinah Shore and Eddie Fisher. He published several autobiographical volumes including the enjoyable 1957 one seen here. He was so big that he even got his own bio-pic in the 1950’s! Maybe it’s time for another one, perhaps a mini-series, so that a generation that may never even have heard of him can come to appreciate the talents of Eddie Cantor.
Posted by Booksteve at 4:52 PM