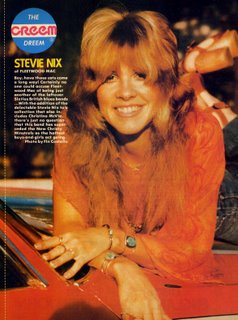 In 1976, CREEM was billing itself as "America’s only rock’n’roll magazine" which undoubtedly came as news to CRAWDADDY, ROLLING STONE, et al. CREEM was a bizarre combination of rock and pop at atime when the music industry was changing almost daily. Elitest "rock journalists" such as Lester Bangs and Cameron Crowe appeared regularly next to tongue-in-cheek articles such as an interview with Jimi Hendrix in heaven. The April issue that year offered a full page pin-up of the "Creem Dreem," one Stevie Nix(sic). It seems that the aging British blues band Fleetwood Mac had just added Stevie along with her boyfriend, guitarist/singer/songwriter Lindsay Buckingham, making the group, according to the mag, "the hottest boys and girls act going" superceding the New Christy Minstrels. Hmmm…Do I detect a touch of sarcasm there? But boy howdy, within two years, the groups seminal albums would be released, her reputation as a great singer and songwriter established and Stevie Nicks would never again have to worry about having her name misspelled.
Posted by Booksteve at 4:38 PM